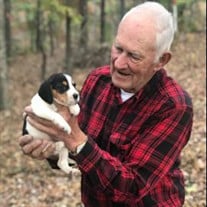 Elzie Ray Faulkner was born on November 23, 1935, in Bixby, Missouri to Irvin and Bessie (Stricklin) Faulkner and passed away June 16, 2020, in Belleview, Missouri at the age of eighty-four years. Ray grew up on the family farm at Neals Creek near Bixby. Ray met Delores Gallaher and were married October 15, 1955, they were blessed with two children, Jim and Donna. Several years later Ray met Nancy Smith and were married in October 1983 and shared a daughter, Annette. After Nancy’s passing in May 1986, he met a very special lady named Martha (Botkin) Talley. Ray and Martha were united in marriage on June 20, 1987. Together they shared twenty-six years of marriage and were blessed to share two children, Cris and Scott. Ray loved and cared deeply for his family and was proud of each and every one of them. Ray had a strong work ethic and worked hard to provide for his family as a sheet metal worker for McDonnell Douglas. For thirty-three years, Ray was a dedicated employee and a good friend to his co-workers. In his spare time, Ray enjoyed spending time outdoors mushroom, rabbit, and deer hunting. He raised chickens and liked to garden. Ray loved spending time with and running his dogs, they made his life whole. He spent time going to swap meets and yard sales, always looking for that piece to add to his collection of knives and tools. Most of all, Ray cherished the time spent with his family, especially with his grandchildren and great-grandchildren. Ray was a member of the Beagle Club and Coonhound Club. Ray is survived by his loving children: Jim Faulkner of St. Charles, MO, Donna Lees and husband Archie of St. Peters, MO, Cris Reddick and husband Shawn of Viburnum, MO, Scott Talley and wife Chris of Bonne Terre, MO, and Annette Maddox of Barnhart, MO; siblings: Earl Faulkner and wife Jean of St. Charles, MO, Roy Faulkner and wife Wanda of Bixby, MO, and Norma Wright of Lesterville, MO; grandchildren: Mark Tabor and wife Traci of O’Fallon, MO, Jennifer Cooper and husband Bill of St. Charles, MO, Averie Wigger and husband Austin of Viburnum, MO, Andy O’Dell of Viburnum, MO, Carter Dunn of Bonne Terre, MO, Cooper Dunn of Bonne Terre, MO, JD Maddox of Barnhart, MO; great-grandchildren: Hannah Cooper, Abigail Cooper, Brooklynn Cooper, and Gavin Tabor; extended family and friends. Preceding him in death were his wives: Martha Faulkner and Nancy Faulkner; parents: Irvin and Bessie Faulkner; and brothers: Ernest and Dempsy Faulkner. Ray will be remembered for the love he had for his family and friends. He was a loving father, grandfather, and great-grandfather. He will be deeply missed but fondly remembered by all who knew and loved him. Funeral Services for Elzie Ray Faulkner were held Saturday, June 20, 2020 at the Boss Assembly of God Church with Pastor Bradley Asher, Pastor Paul Davis, and Elvie Hedrick officiating. Special music was provided by Pam Davis and Monica Payne and additional song selection played was “When I Get Where I’m Going”. Serving as Pallbearers were Roy Faulkner, Scott Talley, Mark Tabor, Andy O’Dell, Jim Faulkner, and Austin Wigger. Honorary Pallbearers were Carter Dunn, Cooper Dunn, Dennis Faulkner, Ted Pryor, and Randy Stacy. Burial was in the Boss Cemetery. Arrangements were under the direction of Wilson Mortuary of Viburnum, Missouri. In lieu of flowers, Memorial Contributions may be made in memory of Elzie Ray Faulkner to Boss Cemetery and left at Wilson Mortuary. Online Condolences may be entered at www.wilsonmortuary.com

Elzie Ray Faulkner was born on November 23, 1935, in Bixby, Missouri to Irvin and Bessie (Stricklin) Faulkner and passed away June 16, 2020, in Belleview, Missouri at the age of eighty-four years. Ray grew up on the family farm at Neals Creek... View Obituary & Service Information

The family of Elzie Ray Faulkner created this Life Tributes page to make it easy to share your memories.

Send flowers to the Faulkner family.