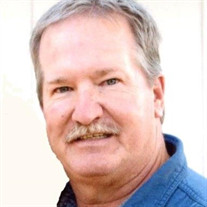 Emett Dwain Conley was born February 20, 1964 in Salem, Missouri to Denver Franklin and Mary Lee (Mathes) Conley. He grew up in Salem and attended Salem Schools. Dwain was united in marriage to his sweetheart, Paula Sue Brooks, on March 5, 1981 and together shared forty years of marriage. Dwain and Paula were blessed with two children: Angela and Paul. Dwain was a loving and supportive husband and father. He had a strong work ethic and worked hard to provide for his family. Dwain was employed with the City of Salem as a lineman for many years before starting his career as a custodian with Southwest Baptist University in 2010. Dwain was an avid outdoorsman and liked spending time in the woods hunting, especially deer, turkey, and antelope. He loved raising beagles, running them, and rabbit hunting. Dwain enjoyed fishing, many times those trips were with his grandchildren. He had a deep love and devotion for his family, he valued spending time and making memories with them. His favorite memories were spent watching his grandchildren play school sports, he was their biggest fan. Dwain departed this life November 28, 2021 in Columbia, Missouri at the age of fifty-seven years. He leaves behind to cherish his memories, his loving wife Paula Conley of the home; daughter: Angela Shaw and husband Nathan of Salem, MO; son: Douglas Paul Conley of Salem, MO; grandchildren: Madison, Hunter, Haiden, and Ava; siblings: Rita Fisher and husband Don, Elaine Chandler, Chris Conley and wife Tricia, Anita Richmond and husband Bill, Becky Lowe and husband Ronnie, and Barbie Nash; mother-in-law: Hattie Brooks; as well as a host of nieces, nephews, cousins, other relatives, and dear friends. Preceding him in death, parents: Denver Conley and Mary Nash; stepfather: Douglas Nash; sisters: Julie Nash and Dawn Nash; father-in-law: Paul Brooks; brothers-in-law: Stanley Chandler and Dale Brooks; and nephews: William Nickels and Billy Richmond. Dwain will be missed beyond measure. He leaves behind a great legacy of faith, love, kindness and devotion for his family and friends. Funeral Services for Emett Dwain Conley were held Friday, December 3, 2021 in the Wilson Mortuary Salem Chapel with Pastor Lyndell Decker officiating. Song selections played were “Jealous of the Angels”, “If You Get There Before I Do”, and “Go Rest High On That Mountain”. Serving as Pallbearers were Tucker Conley, Ty Conley, Andrew Alvey, Brandon Alvey, Heath Lea, and Travis Hutchens. Honorary Pallbearers were Hunter Shaw, Haiden Shaw, Madison Shaw, and Ava Shaw. Burial was in the Cedar Grove Cemetery. Arrangements were under the direction of Wilson Mortuary of Salem, Missouri. Condolences may be left at www.wilsonmortuary.com

Emett Dwain Conley was born February 20, 1964 in Salem, Missouri to Denver Franklin and Mary Lee (Mathes) Conley. He grew up in Salem and attended Salem Schools. Dwain was united in marriage to his sweetheart, Paula Sue Brooks, on March 5, 1981... View Obituary & Service Information

The family of Emett Dwain Conley created this Life Tributes page to make it easy to share your memories.

Send flowers to the Conley family.