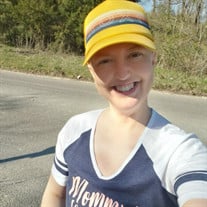 Erica Lynn (Ogle) Hagerty was born on June 29, 1978, in Rolla, Missouri to Danny Lee and Judith Lynn (Tucker) Ogle. She grew up in the Waynesville/Laquey area and graduated with the class of 1996 from Laquey High School. Throughout her high school years, Erica competed in both volleyball and basketball, but softball was her passion. After graduation, she earned a Bachelor degree in Psychology at Missouri State University. She then attended Lincoln University and graduated as a Registered Nurse in 2011. Erica worked at the Life Care Center of Waynesville where she found a purpose for her detailed oriented nature. She found a supportive environment and co-workers who would become lifelong friends. She adored everyone she worked with, and they adored her. On September 28, 2013, after many years of dating, Erica was united in marriage to her best friend and love of her life, Jason Hagerty, at the Three Squirrels Winery in St. James, Missouri. They were happy and in love and wanted a child. Finally, on March 31, 2017, Erica became a mother to “the perfect thing I’ve ever done”, Henry. She discovered the boundless joy of being his mother. Erica envisioned the kind of man he would become and the kind of life she wanted to give him, and she dedicated the rest of her life to meet those goals. Erica enjoyed spending time with her son. The time they shared included walks in the evenings, throwing rocks into the creek and playing in the yard while Henry was in his natural state. Henry would help Erica with her home improvement projects, and Erica would help Henry with his experiments. Poking pencils through ZipLock bags, baking soda volcanoes, rainbows from prisms, Erica was Owlet to Henry’s Catboy. In the evenings, Erica would read books to Henry and Henry would regale Erica with his tales of pirates and monsters. Finally, Erica would sit in his room long hours after he fell asleep just to hear him breath. Henry was her life and she did not want anything more. Erica enjoyed spending time reading nonfiction books, riding her bicycle, messing with the potted plants, and watching movies at the theater. When she had a chance to get away, she loved going to the beach. But when travel was not possible, Erica found great joy in disappearing into the world of Harry Potter. Erica was kind, loving and thoughtful. She was also fierce, independent and strong. She was fun and happy, but she was also angry. Erica was diagnosed with an aggressive form of breast cancer in 2019. She tried everything she could to enable her to witness Henry grow into a young man. She hoped for more years than she ultimately got. Erica departed this life on May 15, 2021 in Rolla, Missouri at the age of forty-two years. She leaves behind to cherish her memory, her loving husband Jason Hagerty of Waynesville, MO; son: Henry Hagerty of the home; mother: Judith Ogle of Waynesville, MO; brother: Timothy Ogle of Waynesville, MO; as well as a host of aunts, uncles, cousins, nieces, nephews, other relatives, and dear friends. Preceding her in death, father: Danny Ogle; brother: Derek Ogle; and grandparents: Effie and Bryan Tucker and Lorraine and Kenneth Ogle. Funeral Services for Erica Lynn (Ogle) Hagerty were held Tuesday, May 18, 2021 at Buckhorn First Baptist Church with Pastor Chris Hendrix officiating. Song selections played were “This is Me” and “Feels Like Home”. Serving as Pallbearers were Tim Ogle, Teneiva Morlock, Travis Prewitt, Billie Hinkle, Leon Mcgilbra, and Matthew Perrine. Burial was in the Sunset Memorial Estates Cemetery. Arrangements were under the direction of Wilson Mortuary of Salem, Missouri. Online condolences may be entered at wilsonmortuary.com

Erica Lynn (Ogle) Hagerty was born on June 29, 1978, in Rolla, Missouri to Danny Lee and Judith Lynn (Tucker) Ogle. She grew up in the Waynesville/Laquey area and graduated with the class of 1996 from Laquey High School. Throughout her high... View Obituary & Service Information

The family of Erica Lynn (Ogle) Hagerty created this Life Tributes page to make it easy to share your memories.

Send flowers to the Hagerty family.