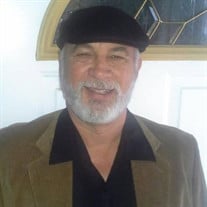 Farrell Eugene Southards was born on August 8, 1953 in Rolla, Missouri to Samuel Dee and Virginia (Berry) Southards. Eugene grew up in Salem and graduated from Salem High School with the class of 1971. He entered the United States Army on May 20, 1974 and served his country faithfully until his honorable discharge. Eugene was united in marriage to his sweetheart, Lori Ann Abt, on January 16, 2003 in Fulton, Missouri and together blessed with eighteen wonderful years of marriage. He was the proud father of three children: Melanie, Jimmy, and Harold Dee that he shared with Sherry Biggs. Once Eugene and Lori married, he gained three daughters: Amber, Michelle, and Sandra. Eugene possessed an incredible work ethic that allowed him to provide for his family. He was a manager at Wal-Mart and enjoyed serving the community. Throughout the years, Eugene was employed with the road and bridge department as the lead operator road grader, he served as a police officer and deputy sheriff for a time and was an owner/operator truck driver. Eugene liked to spend time outdoors fishing and hunting. His current passion was tinkering with his 1969 Volkswagen Bug. Eugene loved music and was the bass guitar player for the Ozark Country Band. They enjoyed their time together playing at The Barn and recently got back together after thirty years and played at several local benefits. Eugene and his family moved around frequently and no matter where they lived, they always ran into someone he knew. He was a family man and most important to him was spending time with his family, especially making memories with his grandchildren and great-grandchildren. Eugene departed this life on August 29, 2021 in Salem, Missouri at the age of sixty-eight years. He leaves behind to cherish his memories, loving wife Lori Southards of the home; children: Melanie Flett and husband Scott of Rolla, MO, Jimmy Southards and wife Tammy of Rolla, MO, and Harold Dee Southards of Salem, MO; step-children: Amber Hammack and husband David of Massachusetts, Michelle Nelson of Salem, MO, and Sandra Nelson and significant other Andrew Gundel of Seligman, MO; grandchildren: Jacob, Isaiah, Chelsea, Samuel, Christabel, Carter, Krista, Landon, Luke, Savannah, Aryssa, Ellie, Emma, and one on the way; great-grandchildren: Cass, Sutton, and Keziah on the way; great-aunts: Elnora Southards and Bonnie Berry; extended family and friends. Preceding him in death, parents: Samuel Dee and Virginia Southards; infant brother: Howard Wayne Southards; and great-uncle: Martin Lee Southards. Eugene leaves behind a wealth of friendships, and legacy of honor, respect, and love for family, home, and country. He will be forever missed. Funeral Services for Farrell Eugene Southards were held Thursday, September 2, 2021 in the Wilson Mortuary Salem Chapel with Dennis Crocker officiating and David reading the obituary. Song selections played were “Neon Moon” and “See You Again”. Serving as Pallbearers were Jacob Fisher, Isaiah Fisher, Jim Standfast, David Biele, Terry Berry, and Wayne Southards. Honorary Pallbearers were Leland Ellerman, Elva Gorman, and Kenny Star. Military Honors was provided by the American Legion Post 99 and United States Army. Burial was in the Mt. Hermon Cemetery. Arrangements were under the direction of Wilson Mortuary of Salem, Missouri. Memorial Contributions may be made in memory of Eugene Southards and left at Wilson Mortuary. Online Condolences may be entered at www.wilsonmortuary.com

Farrell Eugene Southards was born on August 8, 1953 in Rolla, Missouri to Samuel Dee and Virginia (Berry) Southards. Eugene grew up in Salem and graduated from Salem High School with the class of 1971. He entered the United States Army on May... View Obituary & Service Information

The family of Eugene Southards created this Life Tributes page to make it easy to share your memories.

Send flowers to the Southards family.