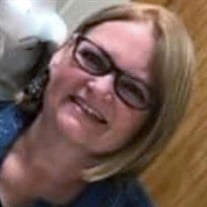 Faye Chilton-Koper was born on April 2, 1960, in Salem, Missouri to Cecil and Thelma. She grew up in Salem and graduated with the class of 1978 from Salem High School. Faye was a hard worker and enjoyed many years working as a clerk in the medical field. Throughout the years, she worked at Salem Memorial District Hospital, for Dr. Demorlis’ and Blue Cross Blue Shield Missouri. Faye was united in marriage to Irvin “Butch” Stanley Koper on December 27, 2005, in Michigan. Faye and Butch shared sixteen years of memories together and were blessed to share two daughters: Katrina and Monica. In her younger years, Faye attended Revival Tabernacle. Her faith, family, and friends were extremely important to her. She was always there for her daughters along with her nieces, and nephews. Faye enjoyed flowers and loved antiques. Faye departed this life on May 28, 2022, in Fenton, Missouri at the age of sixty-two years. She leaves behind her husband Irvin “Butch” Koper of Salem, MO; daughters: Katrina Hernandez and husband Filipe and Monica Koper and significant other Ernie Perez; sister: Marilyn Redman of Salem, MO; brother: Gary Chilton and wife Beulah of Salem, MO; sister at heart: Rita and husband Jimmy; sisters-in-law: Dolly Koper, Sandy Dzwonik, and Kimberly Davis and husband John; brother-in-law: Carl Plank; grandchildren: Briana, Giovanni, Diego, Karina, and Andrea; nieces and nephews: Michael Dzwonik, Sherry Koper, Jason Koper, John, Deanna, Mike, Treasa, Brian, Lisa, Keith, Shelly, Larry, and Michael; extended family and dear friends. Preceding her in death, father: Oscar Chilton; mother: Thelma Chilton Myers; sisters: Dorothy West and husband Kenneth, Glenda Plank, and infant sister Shirley Chilton; brother: James Chilton; brother-in-law: Jack Redman; nephew: Doug West; and great-niece: Chelsea Nickles. Faye was one of a kind. She was determined, strong-willed, and straightforward yet loving, caring, and kind. Her memory will live on in those who loved her most. Memorial Services for Faye Chilton-Koper were held Thursday, June 2, 2022 in the Wilson Mortuary Salem Chapel with Pastor Bill Stack officiating. Special Music was provided by Sheri Stack and additional song selection played was “Ben”. Arrangements were under the direction of Wilson Mortuary of Salem, Missouri. Online condolences may be entered at www.wilsonmortuary.com

Faye Chilton-Koper was born on April 2, 1960, in Salem, Missouri to Cecil and Thelma. She grew up in Salem and graduated with the class of 1978 from Salem High School. Faye was a hard worker and enjoyed many years working as a clerk in the... View Obituary & Service Information

The family of Faye Chilton-Koper created this Life Tributes page to make it easy to share your memories.

Send flowers to the Chilton-Koper family.