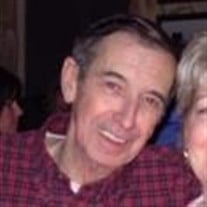 Franklin "Frank" D. Gibbs was born November 4, 1933 in Salem, Missouri to Winn and Lena (Chambers) Gibbs and passed away January 28, 2019 in the Select Specialty Hospital of Saint Charles, Missouri at the age of eighty-five years. As a young boy, Frank attended school in Salem, Missouri where he first met Patsy Sue Whitaker. After Frank's schooling years, the two fell in love and were united in marriage on December 12, 1953. Frank and Patsy Sue had a great and wonderful marriage and to this union was born one daughter: Debra. In the mid 50's Frank and Patsy Sue moved to St. Charles, Missouri. Early in the 60's he began working for Firestone Tire and Rubber Company at the Grand Ave. Store in St. Louis, Missouri. He began working in the service department servicing vehicles; eventually worked his way up to manager. Frank managed retail and wholesale locations in East St. Louis, Illinois as well as Florissant and Saint Charles, Missouri. Frank moved to Dealer Sales positions; which moved him and Patsy Sue to Jefferson City, Missouri and Omaha, Nebraska. Frank enjoyed many great years working with the company and retired in July 1993 and returned to Salem, Missouri to be around family and friends. Frank enjoyed trout fishing. He would often take his family on vacations to Branson for fishing and camping. Bennett Springs State Park was also one of his favorite places to visit. Eventually Frank bought a home at Montauk Village which became a place where Frank could spend many fun times with family and friends; many wonderful memories were made there. He also enjoyed reading and in his later years; much of his time was spent with one novel after another. Frank was a member of the Masonic Order #241, AF&AM and Order of Eastern Star - Alexander Chapter #242 both of St Charles, Missouri. He had a wonderful personality; loved to tease his family and friends. His witty and humorous personality was ever never mean spirited; always out of love for those around him. Frank is preceded by his wife Patsy Sue Whitaker Gibbs; his parents: Winn and Lena Gibbs; sister: Flossie Gibbs; brother: John Gibbs; and son in law: Steven Edmunds. Frank is survived by his loving daughter: Debra Edmunds of Lake in the Hills, IL; two sisters in law: Doris Whitaker of Salem, MO. and Eloise Whitaker of St. James, MO; many nieces, nephews, cousins and other relatives and dear friends. Frank will be sadly and deeply missed, but fondly remembered by all those who knew and loved him. Funeral service for Frank D. Gibbs was held Saturday, February 2, 2019 at the Wilson Mortuary Salem Chapel with Pastor Chuck Whitmire giving the message and Pastor Joe Hubbs reading the obituary. Special music was shared by Melinda Medlock: "How Great Thou Art" and "This Is Just What Heaven Means To Me". Serving as Pallbearers were Danny Medlock, Steve Whitaker, Harold Tubbs, Terry Crocker, Dennis Inman and Dale Plank. Interment was in the Cedar Grove Cemetery of Salem, Missouri. All arrangement under the care and direction of Wilson Mortuary of Salem.

Franklin "Frank" D. Gibbs was born November 4, 1933 in Salem, Missouri to Winn and Lena (Chambers) Gibbs and passed away January 28, 2019 in the Select Specialty Hospital of Saint Charles, Missouri at the age of eighty-five years. As a young... View Obituary & Service Information

The family of Franklin "Frank" D. Gibbs created this Life Tributes page to make it easy to share your memories.