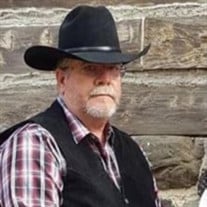 Freddie "Fred" Dewayne Hill was born April 29, 1960 in Oklahoma City, Oklahoma to Billy Carl and Marjorie Annice (Cassel) Hill and passed away April 12, 2021 in Joplin, Missouri at the age of sixty years. Fred grew up in Verden, Oklahoma and graduated from Verden High School. He attained his bachelor's degree in Agriculture from OSU. Fred was united in marriage to his sweetheart, Tammie on June 30, 2012 in Verden, Oklahoma. He was blessed with two daughters, Elizabeth and Katherine, and blessed to share four step-daughters, Kalah, Lindsey, Courtney, and Maggi. Fred's knowledge of agriculture served him well throughout his working career. He started selling chemicals for an agriculture company and was most recently employed as manager of MFA in Rich Hill, MO. He valued hard work and took pride in caring for his family. Fred's love of agriculture began when he was young. He was involved with FFA in high school and passed that appreciation on to his daughters and step-daughter, Maggi. Fred loved nature and enjoyed spending time outdoors hunting deer, turkey, and spending time in his barn working and building things. He was an avid NASCAR fan and always cheered for Jeff Gordon. He was a jokester who enjoyed making people laugh. Fred looked forward to driving a tractor in the Rich Hill 4th of July parade. Fred deeply loved his family and his greatest joy was spending time with them and making memories with his grandchildren. Fred was a member of Verden United Methodist Church. He was a Lay Speaker and was always willing to help out in the preacher's absence. He never hesitated to help with church activities in whatever capacity was needed. Fred leaves behind to cherish his memories, his loving wife Tammie Hill of the home; two daughters: Elizabeth Wedel and husband Tyler of Lahoma, OK, Katherine Crow and husband Zack of Lahoma, OK; four step-daughters: Kalah Sullins and husband Cody of Licking, MO, Lindsey Camenisch and husband Josh of Edgar Springs, MO, Courtney Grauf and husband Lenis of Salem, MO, and Maggi Medley of Licking, MO; parents: Bill and Annice Hill of Verden, OK; father in law: Boyd Berry of Salem, MO; sister: Denise Wall and husband Joe of Tuttle, OK; seven granddaughters, two grandsons, and three grandchildren on the way; as well as other relatives and friends. Fred was deeply loved by his family and will be long remembered for his big-heart and fun-loving personality. Funeral Services for Freddie “Fred” Dewayne Hill were held Thursday, April 15, 2021 in the Wilson Mortuary Salem Chapel with Pastor Joe Hubbs officiating. Song selections played were “Go Rest High On That Mountain”, “I Want To Stroll Over Heaven With You”, and “Lead Me Home”. Funeral Services in Chickasha, Oklahoma were held Saturday, April 17, 2021 at McRay Funeral Home with Pastor David Gardner officiating. Serving as Pallbearers were Lenis Grauf, Josh Camenish, Cody Sullins, Tyler Wedel, Zack Crow, and Joe Wall. Burial was in the Liberty Cemetery. Arrangements were under the direction of Wilson Mortuary of Salem, Missouri and McRay Funeral Home of Chickasha, Oklahoma. Online condolences may be entered at wilsonmortuary.com

Freddie "Fred" Dewayne Hill was born April 29, 1960 in Oklahoma City, Oklahoma to Billy Carl and Marjorie Annice (Cassel) Hill and passed away April 12, 2021 in Joplin, Missouri at the age of sixty years. Fred grew up in Verden, Oklahoma and... View Obituary & Service Information

The family of Freddie "Fred" Dewayne Hill created this Life Tributes page to make it easy to share your memories.

Send flowers to the Hill family.