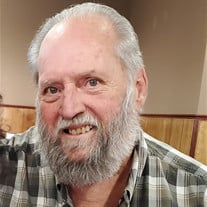 Gary Paul Hogan was born on April 26, 1947 in St. Louis, Missouri to Paul and Euna Grace (Holland) Hogan. He was united in marriage to his sweetheart, Barbara Sue Mooney, on February 12, 1966 at the First Baptist Church in Salem, Missouri and together shared fifty-five years of memories. Gary and Barbara were blessed with two children: Angela and Jason. Gary possessed an incredible work ethic that allowed him to provide for his family. He was talented with his hands as a mechanic and constantly stayed busy. Throughout his working career he was employed with McDonnell Douglas, Amax Lead Mine, and Briggs and Stratton. In the early 1980s, Gary owned and operated G&B Repair Service. Gary was an avid antique collector, always finding flea markets and antique shops to stop at. He loved going on family vacations, especially in the Colorado Mountains, and enjoyed the cabins and scenery. While in Colorado, he frequently visited the Mason Jar Restaurant. Gary liked to cook, but truly enjoyed his wife’s chocolate chip cookies and German chocolate cake. His family was most important to him, especially his grandchildren and great-grandchildren. Gary was a great example of a godly man, always talking about the Lord. He was a member of the Salem First Baptist Church and often watched services online at Oak Grove Baptist Church. Gary had a great relationship with his cousin, Pastor Terry Hogan, and enjoyed their conversations. Gary departed this life on August 21, 2021 at his home in Salem, Missouri surrounded by his loving family at the age of seventy-four years. He leaves behind to cherish his memories, loving wife Barbara Hogan of the home; daughter: Angela Brooks and husband Matt of Rolla, MO; son: Jason Hogan and wife Amelia of Republic, MO; siblings: Mike Hogan, Kirk Hogan and wife Sandy, Lesa Hogan, David Hogan and wife Karen; grandchildren: Aaron Alan, Alexis, Autumn, Xander, Amari, Blake, Jesslyn and husband Danny, and Aaron Edward; great-grandchildren: Zaron, Daxton, Olliver, and Addisyn; as well as a host of nieces, nephews, cousins, other relatives and friends. Preceding him in death, parents: Paul and Euna Hogan and brother: Keith Hogan. Gary was a great man who’s smile, and kindness will continue to radiate in the hearts and minds of others. He will be forever missed but not forgotten. Funeral Services for Gary Paul Hogan were held Wednesday, August 25, 2021 in the Wilson Mortuary Salem Chapel with Pastor Chris Hendrix and Pastor Rocky Lindley officiating. Special Music was provided by Autumn and Matt singing "Bible and a .44", Autumn and Alexis singing "To Make You Feel My Love", and Matt singing "Old Rugged Cross". Serving as Pallbearers were Mike Hogan, Kirk Hogan, David Hogan, Sidney Naramore, Garrett Graves, and Aaron Brooks. Honorary Pallbearers were Lesa Hogan, Aaron Gorman, and Xander Alexander. Burial was in the Jadwin Cemetery. Arrangements were under the direction of Wilson Mortuary of Salem, Missouri. Memorial Contributions may be made in memory of Gary Hogan and left at Wilson Mortuary. Online Condolences may be entered at www.wilsonmortuary.com

Gary Paul Hogan was born on April 26, 1947 in St. Louis, Missouri to Paul and Euna Grace (Holland) Hogan. He was united in marriage to his sweetheart, Barbara Sue Mooney, on February 12, 1966 at the First Baptist Church in Salem, Missouri and... View Obituary & Service Information

The family of Gary Paul Hogan created this Life Tributes page to make it easy to share your memories.

Send flowers to the Hogan family.