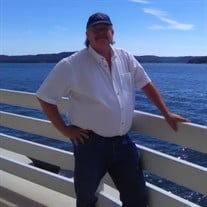 George Gilbert was born on December 5, 1960, in Oakland, California to Ernest Eugene and Ann Laurie (Muzzy) Gilbert. He grew up in Santee, California, and graduated from El Captain High School. At the age of eighteen, George moved to Missouri and started working for Elgin Surveying and Engineering. He retired after thirty-two years of hard work and commitment. George was the proud father of two daughters, Mindy and Ashley. He was a dedicated father and took great pride in supporting and caring for his family. George was united in marriage to his sweetheart, Karen Diane Carpenter, on November 27, 2002, in Rolla, Missouri. George and Diane shared nineteen years of laughter and memories together. A devoted family man, George valued his time spent with his wife, children, and grandchildren. George had a big heart and enjoyed helping those in need. After retirement, he started working for SMTS as a driver and loved serving the community. George didn’t know a stranger; he was a social person who enjoyed talking to others. He was an excellent storyteller and had a memory like an elephant. He was an avid coin collector, very artistic, and liked playing dominos and cards. In his spare time, he could be found spending time outdoors fishing. George departed this life on April 10, 2022, surrounded by his loving family at his home in Salem, Missouri at the age of sixty-one years. He leaves behind to cherish his memory, loving wife Diane Gilbert of Salem, MO; daughters: Mindy Millburg and husband Nate of Doolittle, MO and Ashley Gilbert of Farmington, MO; siblings: Gene Gilbert and wife Nita of Marshfield, MO, Rebecca Cook and husband Jim of St. Charles, MO, and Brian Freeman and wife Stacy of La Habra, CA; grandchildren: Nathanial Gilbert, Casey Gilbert, Maggie Frank, Terry Millburg, Clark Millburg, and Jaden Millburg; as well as a host of nieces, nephews, cousins, other relatives, and dear friends. Preceding him in death, his parents: Ernest and Ann Gilbert; brothers: Ernie and Kim; sister: Elizabeth; and beloved grandson: Dalton Frank. George will be remembered for his friendly spirit, helpfulness, and kindness to everyone he met and knew. He will be forever missed by his loving family and dear friends. Funeral Services for George Gilbert were held Friday, April 15, 2022 in the Wilson Mortuary Salem Chapel with Bob Myers officiating. Song selections played were “Live Like You Were Dying”, “Old Rugged Cross”, “Scars In Heaven”, and “The Last Resort”. Serving as Pallbearers were Mike Godi, Jim Lacy, Casey Gilbert, Nathan Gilbert, Gene Gilbert, and Brian Freeman. Honorary Pallbearers were Steve Levin and Ed Wyatt. Burial was in the Cedar Grove Cemetery. Arrangements were under the direction of Wilson Mortuary of Salem, Missouri. Online Condolences may be entered at www.wilsonmortuary.com

George Gilbert was born on December 5, 1960, in Oakland, California to Ernest Eugene and Ann Laurie (Muzzy) Gilbert. He grew up in Santee, California, and graduated from El Captain High School. At the age of eighteen, George moved to Missouri... View Obituary & Service Information

The family of George Gilbert created this Life Tributes page to make it easy to share your memories.

George Gilbert was born on December 5, 1960, in Oakland, California...

Send flowers to the Gilbert family.