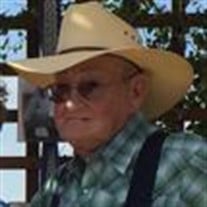 George Marion Gorman was born on June 5, 1941, in Montauk, Missouri to James Asa and Etta Mae (Nelson) Gorman, and passed away January 9, 2020, surrounded by his loving family at his home in Salem, Missouri at the age of seventy-eight years. George grew up on the family farm in the Montauk area and learned at a very young age how to work hard. Growing up, he spent several hours a day cutting wood alongside his father. In 1957, George accepted Christ and was baptized. George was drafted into the United States Army at the age of twenty-one and served his country faithfully. For his honorable service, George earned many decorations, medals, ribbons, and awards. George was blessed with seven children: Becky, Vickie, John, Melissa, Carla, Sandy, and Etta. He worked hard to provide for his family. During his life, George was a logger and spent many hours in the family sawmill, though he always dreamed of being a cowboy, so he packed up his family and headed out west. George lived his dream working in Wyoming and Montana for several years. Later he had served other occupations; a carpenter, truck driver, heavy equipment operator, and a pipeline spread boss in Oklahoma. George finally moved back to Missouri in 1999 to farm and raise cattle. George loved farming and spending time in the fields with his cattle. He enjoyed hunting and telling his stories at Deer Camp. George treasured his family and cherished the time spent with them, especially with his grandchildren, great-grandchildren, nieces, and nephews. George is survived by, Christene of the home; seven children: Becky Cook and husband Greg of Belle, MO, Vickie Branson and husband Tim of Belle, MO, John Gorman and wife LaDonna of Geary, OK, Melissa Mahurin and Gene Shaw of Salem, MO, Carla Fisher and husband Micky of Watonga, OK, Sandy Edsall of Watonga, OK, and Etta Phillips and Brian Hearn of Salem, MO; four siblings: Mary Etta Rinne, Max Roy Gorman and wife Trudy, Shirley Moser and husband John, and Nancy James; seventeen grandchildren; twenty-six great-grandchildren; one great-great-grandchild; as well as many nieces, nephews, extended family and friends. Preceding him in death, were his parents: James and Etta Mae Gorman; sons-in-law: Roger Mahurin, Steve Edsall, and Scott Cook; grandson: Trace Cook; brothers-in-law: Bob Rinne and Rick James. George was a dedicated cowboy and passionate in sharing his knowledge with his family and friends. Funeral Services for George Marion Gorman were held Monday, January 13, 2020 in the Wilson Mortuary Salem Chapel with Richard LaBrash Sr. officiating. Song selections played were "Go Rest High On That Mountain", "Take My Hand, Precious Lord", and "Lead Me Home". Serving as Pallbearers were Rick "Tiny" Gorman, Gene Shaw, Brian Hearn, Loyde Braidlow, Eugene Piatt, Micky Fisher, and Ethan Piatt. Honorary Pallbearers were his loving Grandsons, Kenneth Brooks, and Kenny Wells. Military Honors were provided by the United States Army and American Legion Post 99. Burial was in the Patterson Cemetery. All arrangements were under the direction of Wilson Mortuary of Salem, Missouri. Online condolences may be entered at www.wilsonmortuary.com

George Marion Gorman was born on June 5, 1941, in Montauk, Missouri to James Asa and Etta Mae (Nelson) Gorman, and passed away January 9, 2020, surrounded by his loving family at his home in Salem, Missouri at the age of seventy-eight years. George... View Obituary & Service Information

The family of George Marion Gorman created this Life Tributes page to make it easy to share your memories.

Send flowers to the Gorman family.