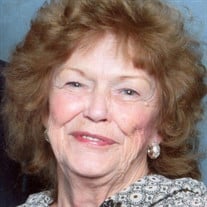 Glenna Mae (Crocker) Jennings was born December 20, 1941, to Harley and Nellie (Trolinger) Crocker. She grew up in Black, Missouri, and departed this life March 30, 2022, in Salem, Missouri at the age of eighty years. Glenna was blessed with two children, Kim and Rick, and further blessed with seven grandchildren and seven great-grandchildren. She was a strong, loving mother who devoted her life to caring for her family. Glenna was a doting grandmother and proud great-grandmother, she valued spending time with her family and treasured the memories they made together. Glenna was united in marriage to George Malcolm Jennings on September 4, 1987 and together shared thirty-one years of laughter and memories. She was a dedicated and supporting wife and cherished her time spent with George until his passing on December 11, 2018. Glenna was a hard worker and worked at Amax Lead Company for many years. She was gifted with talented hands and in her spare time, she loved to sew and crochet. Glenna took great pride in caring for her home and enjoyed cooking and baking. She was a lady of great faith and attended the Assembly of God Church when she was able. Glenna also liked listening to Jimmy Swaggart and other evangelists. Glenna leaves behind to cherish her memory, loving children: Kim Harris and husband Randy of Salem, MO and Ricky Mathes and wife Rhonda of Poplar Bluff, MO; sister: Delores Mathes; brother: Steve Crocker and wife Kathy; sister-in-law: Kathy Crocker; grandchildren: Heather, Kelby, Becca, Nicole, Mikayla, Morgun, and Lilly; great-grandchildren: Harper, Emmalyn, Baylee, Adalyn, Hudson, Liam, and Luke; as well as a host of nieces, nephews, cousins, other relatives, and dear friends. Preceding her in death, husband: George Jennings; parents: Harley and Nellie Crocker; and brothers: Lindell and Jesse. Glenna was a sweet, loving lady with a smile that lit up a room. She will be forever missed but never forgotten. Funeral Services for Glenna Mae (Crocker) Jennings were held Saturday, April 2, 2022 in the Wilson Mortuary Salem Chapel with Pastor Chris Hendrix officiating. Song selection played was “Amazing Grace”. Serving as Pallbearers were Morgun Mathes, Jake Ritter, and Kelby Pryor. Burial was in the Smith Cemetery Oates, Missouri. Arrangements were under the direction of Wilson Mortuary of Salem, Missouri. Online Condolences may be entered at www.wilsonmortuary.com

Glenna Mae (Crocker) Jennings was born December 20, 1941, to Harley and Nellie (Trolinger) Crocker. She grew up in Black, Missouri, and departed this life March 30, 2022, in Salem, Missouri at the age of eighty years. Glenna was blessed with... View Obituary & Service Information

The family of Glenna Mae (Crocker) Jennings created this Life Tributes page to make it easy to share your memories.

Send flowers to the Jennings family.