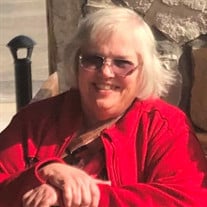 Gloria Evelyn Hayes was born on February 8, 1949, in Houston, Missouri to Harold Glen and Doris Evelyn (Wallace) Hayes and passed away on January 13, 2020, at her home in Salem, Missouri at the age of seventy years. Gloria was a hard-worker who started her working years early with Salem Sportswear. She spent five years there before beginning her teaching career at the Christian School. While teaching, she touched the lives of many students leaving a lasting impression on them. In 1989, Gloria started working at Salem Memorial District Hospital in materials management and enjoyed her time there until retirement. In her spare time, Gloria had an interest in embroidery and made several special gifts for others. Gloria was extremely involved in church and her faith was evident to all she encountered. She was a member of the Pentecostal Church of God for several years before serving the last four years at Grace Community Church. Gloria's relationship and love for Jesus was the most important thing in her life. She enjoyed singing around the piano and worshipping with her church family. Gloria had a passion for missions and was blessed to be part of a trip to Guatemala and helped build a church there. Gloria's friends and family have countless stories where she has impacted their lives through her faith and her passionate love of people. Gloria's family was very important to her, she had a strong bond with her siblings and they brought her so much laughter and friendship. Gloria was a mother-like figure to her nieces and nephews, she cherished her time spent with them and creating memories. Gloria is survived by her loving siblings: Rita Skiles and husband Dennis of Salem, MO, Lois Ball and husband Dennis of Salem, MO, Tommy Hayes of Salem, MO, Sandra Cronk of Harrisonville, MO, and Jimmy Hayes and wife Sonnya of Salem, MO; as well as many nieces, nephews, great-nieces, great-nephews, extended family and friends. Preceding her in death were her parents: Harold and Doris Hayes; brother: Jerry Hayes; sister-in-law: Ann Hayes; nephew: Shane Ball. Gloria was known as a prayer warrior. Her zest for life, faith in God, love for her family and devotion to serving others created a space filled with joy and treasured memories in the hearts and minds of others. She was truly a wonderful lady with a beautiful soul and will be greatly missed by all who knew and loved her. Funeral Service for Gloria Evelyn Hayes was held Thursday, January 16, 2020 in the Wilson Mortuary Salem Chapel with Pastor Chris Ball and Pastor Shannon Lambert officiating. Special music was provided by Dennis Skiles and A.J. Cronk. Serving as Pallbearers were Sam Ball, A.J. Cronk, Robert Dowling, Andy Nash, Frank Brooks, David Cronk, and Sam Hayes. Honorary Pallbearers were Jake Ball and Gary Bartle. Burial was in the Cedar Grove Cemetery. Arrangements were under the direction of Wilson Mortuary of Salem, Missouri. Memorial Contributions may be made in memory of Gloria Evelyn Hayes to the Missions Program at Grace Community Church and left at Wilson Mortuary. Online condolences may be entered at www.wilsonmortuary.com

Gloria Evelyn Hayes was born on February 8, 1949, in Houston, Missouri to Harold Glen and Doris Evelyn (Wallace) Hayes and passed away on January 13, 2020, at her home in Salem, Missouri at the age of seventy years. Gloria was a hard-worker... View Obituary & Service Information

The family of Gloria Evelyn Hayes created this Life Tributes page to make it easy to share your memories.

Send flowers to the Hayes family.