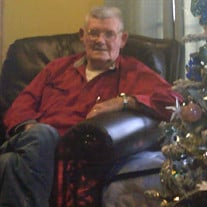 Harold Bryan Holloway was born on April 9, 1941 in Bellflower, Missouri to James and Maggie (Cochran) Holloway and passed away on November 11, 2020 surrounded by his loving family at home in Salem, Missouri at the age of seventy-nine years. Harold was united in marriage to the love of his life, Nancy Louise Sturdevant on February 24, 1962 and together shared fifty-eight years of memories and was blessed with three children: Carolyn, Timothy, and John. During his working years, Harold was an over the road truck driver until his retirement. He later became a restaurant owner of the Corner Café and Spring Creek Café and enjoyed serving the Salem Community. When he wasn’t working, Harold liked to buy and sell cars and in his early years, he liked to ride horses. Most important to Harold was his family; he cherished the time spent with them, especially his grandchildren and great-grandchildren. Harold is survived by his loving wife: Nancy Holloway of the home; two children: Carolyn Roberts and husband Joe of Rolla, MO and Timothy Holloway and special friend Wes Carson of Ironton, MO; two grandchildren: Joel Ryan and wife Crystal of Salem, MO and Jonathon Ryan of Bismarck, MO; six great-grandchildren: Kayden, Colton, Makayla, Brendon, Jonathon, and Eli; extended family and friends. Preceding him in death, son: John Holloway and parents: James and Maggie Holloway. A Private Family Gathering will be held at a later date. Arrangements are under the direction of Wilson Mortuary of Salem, Missouri. Memorial Contributions may be made in memory of Harold Bryan Holloway and left at Wilson Mortuary. Online condolences may be entered at wilsonmortuary.com

Harold Bryan Holloway was born on April 9, 1941 in Bellflower, Missouri to James and Maggie (Cochran) Holloway and passed away on November 11, 2020 surrounded by his loving family at home in Salem, Missouri at the age of seventy-nine years. Harold... View Obituary & Service Information

The family of Harold Bryan Holloway created this Life Tributes page to make it easy to share your memories.

Send flowers to the Holloway family.