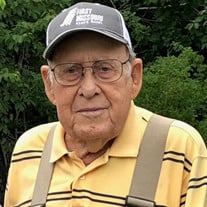 Harold Eugene Smith was born on November 4, 1921 in Oates, Missouri to Demcy Raymond and Ida Cordella (Barton) Smith, he grew up in Oates and attended Oates Grade School. At the age of fifteen, Harold met up with Freedia Lorene Prater at the Oates Church House, and a week following, teenage sweethearts were born. Harold and Freedia were united in marriage on February 2, 1941 in Oates and together shared seventy-eight years of memories before her passing on March 7, 2019. Harold and Freedia were blessed with seven children: Shirley, Sudia, Gene, Janice, Dwain, Pamela, and Teresa. Harold was a member of the Civilian Conservation Corps, enrolling in Ellington, Missouri on April 4, 1939, he was honorably discharged on September 25, 1939. Harold was a hard worker and took great pride in raising his family. He held many jobs throughout his life to feed his family, starting with the JCPenney Warehouse in St. Louis. He then moved on to the Frisco Railroad and on to Viking Freight Co. later came the Ross Lillard Tree Service Co., and then the Lewin Metal Co. in St. Louis. In 1965, Harold went to work for Keywitt Construction, shaft sinking for the mines at Buick. He then started to work in 1968 for Cominco American Mines at Bixby and retired in 1984. An avid outdoorsman, Harold enjoyed hunting, fishing at Clearwater Lake, taking care of his pigs, mowing the lawn, gardening, and growing flowers for his lovely wife. Harold was a proud American and honored to cast his vote for eighty years. Most important to him was spending time with his family, he truly cherished the memories made together, especially with his grandchildren, great-grandchildren, and great-great-grandchildren. Harold was baptized in 1948 at the Boss Bridge and on July 3, 1949, alongside Freedia, joined the Boss Assembly of God, becoming lifelong members. He was a godly man who loved the Lord with all his heart, serving Him faithfully even to the very end of his life. Many lives were touched and changed forever because of his service to the Lord. Harold departed this life on June 6, 2021 at his home in Oates at the age of ninety-nine years. He leaves behind to cherish his memories, his loving children: Sudia Johnson and husband Marshall of Flemingsburg, KY, Gene Smith and wife Mariam of Oates, MO, Janice Prater of Villa Ridge, MO, Dwain Smith and wife Ellen of Hillsboro, MO, Pamela Asberry and husband Lewis of Bonne Terre, MO, and Teresa Gamblin and husband David of Bixby, MO; sisters: Claudette Barton of Cherryville, MO and Eunice Stallings and husband Jack of Salem, MO; sixteen Grandchildren; thirty Great-Grandchildren; eleven Great-Great- Grandchildren and two on the way; extended family and friends. Preceding him in death were his loving wife: Freedia Smith; daughter: Shirley Mathes; sons-in-law: John Mathes and William "Sonny" Prater Jr.; great-grandson: Jacob Mathes; parents: Demcy and Ida Smith; and his siblings. The greatest legacy a man can leave is a life well lived in love and service to others, and Harold accomplished that in his ninety-nine years. He was loved and will be missed beyond words by those who knew him. Funeral Services for Harold Eugene Smith were held Thursday, June 10, 2021 in the Wilson Mortuary Viburnum Chapel with Pastor Bill Mathes and Pastor Paul Davis officiating. Song selections played were “I Want To Stroll Over Heaven”, “Grandpa”, “Daddy’s Hands”, and “Go Rest High On That Mountain”. Serving as Pallbearers were his loving grandchildren Mark Smith, Bryan Smith, Kyle Smith, Andrew Asberry, Keith Gamblin, and Tony Gamblin. Honorary Pallbearers were Kolby Bess and Gordon Mathes. Burial was in the Smith Cemetery. Arrangements were under the direction of Wilson Mortuary of Viburnum, Missouri. Memorial Contributions may be made in memory of Harold Smith to the Smith Cemetery and may be left at Wilson Mortuary. Online Condolences may be entered at www.wilsonmortuary.com

Harold Eugene Smith was born on November 4, 1921 in Oates, Missouri to Demcy Raymond and Ida Cordella (Barton) Smith, he grew up in Oates and attended Oates Grade School. At the age of fifteen, Harold met up with Freedia Lorene Prater at the... View Obituary & Service Information

The family of Harold Eugene Smith created this Life Tributes page to make it easy to share your memories.

Harold Eugene Smith was born on November 4, 1921 in Oates, Missouri...