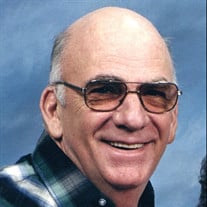 Harry Raymond Jackson was born on January 6, 1945 in Jadwin, Missouri to Fred and Estella (Roeder) Jackson and passed away on October 10, 2019 at his home in Salem, Missouri surrounded by his loving family at the age of seventy-four years. Harry grew up and attended school in Jadwin, Missouri. On May 8, 1965 in Salem, Missouri, Harry married his sweetheart, Leda Jean Weber. Together they shared fifty-three years of marriage and were blessed with five children: Marilyn, Reda, Sherry, Steven and Jennifer. Harry worked hard to provide for his family. He was employed in the Timber Industry as a Cordwood Cutter. His passion for wood led him to build birdhouses, bird feeders, cedar jewelry boxes and tool boxes. He created numerous beautiful works of art for his family and friends. Harry was a strong man of faith and enjoyed teaching Sunday School at the Church of God. He enjoyed to garden and work the flower beds for Leda, Leda was his world. Harry loved his family and was always proud of their accomplishments and achievements. He was a rock for his children and provided them strong words of wisdom. He loved being a grandfather and great-grandfather and cherished his time spent with them. His lovable, kind and caring personality and witty sense of humor drew others towards him leaving a lasting impression in so many lives. Preceding him in death were his parents: Fred and Estella Jackson; wife: Leda Jean (Weber) Jackson; sisters: Dorothy Williams, Lilian Panseke and Maxine Schafer; brothers: John Jackson, Jerry Jackson, Freddie Jackson and Ronnie Jackson. Harry is survived by his five children: Marilyn Barton and husband Matt of Salem, MO, Reda Scott and husband David of Salem, MO, Sherry Tune and husband Mark of Salem, MO, Steven Jackson of Rolla, MO and Jennifer Warden of Salem, MO; two siblings: Richard Jackson and wife Vinita of Jadwin, MO and Pauline Jackson of Rolla, MO; twelve grandchildren: Angela Black, Amy Parsons, Shelly Bowling and husband A.J., Rebecca Cox and husband Joe, Chelsie Fulton and husband Nick, Erin Pogue and husband Logan, Meagan Jackson, Kayla Jackson, Ethan Jackson, Alicyn Warden, Sydney Warden and Jayci Warden; twelve great-grandchildren; extended family and friends. Harry was a man of few but powerful words. He will be remembered not only for his impact as a husband, father and grandfather; but also for his sense of humor and how he treated those around him. Funeral Service for Harry Raymond Jackson was held Monday, October 14, 2019 in the Wilson Mortuary Salem Chapel with Pastor Randy Mahurin officiating. Song selections played were, "Humble and Kind", "Grandpa Told Me So", "Well Done" and "One Day (When We All Get To Heaven). Serving as Pallbearers were Nick Fulton, Logan Pogue, A.J. Bowling, Joe Cox, Eric Dale Black and Ethan Jackson. Honorary Pallbearers were Austin Black. Burial was in the Jadwin Cemetery. All arrangements were under the direction of Wilson Mortuary of Salem, Missouri.

Harry Raymond Jackson was born on January 6, 1945 in Jadwin, Missouri to Fred and Estella (Roeder) Jackson and passed away on October 10, 2019 at his home in Salem, Missouri surrounded by his loving family at the age of seventy-four years.... View Obituary & Service Information

The family of Harry Raymond Jackson created this Life Tributes page to make it easy to share your memories.

Send flowers to the Jackson family.