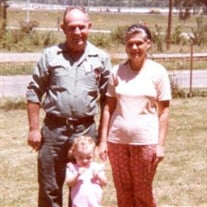 Hazel Marie (Younger) Kerr, one of three children of the late Isaac and Rebecca Jane (Nickels) Younger, was born November 6, 1925 in Alley Springs, Missouri where she grew up and attended school and passed away September 17, 2018 at Salem, Missouri at the age of 92 years. Hazel met a young and handsome man, Raymond Kerr and fell in love. They were united in marriage and spent many wonderful years together. Hazel and Raymond were blessed with two children, Rosalee and Rick. In her spare time she enjoyed being outdoors whether it was fishing or working in her garden. But most of all she loved her family and cherished spending time with them especially the grandchildren and great-grandchildren. Hazel was known to be a sweet and kind lady who took great pride and taking care of her family and friends. In addition to her parents, Hazel is preceded in death by her husband; Raymond Kerr; her son: Rick Kerr; two siblings: Maxine Conners and Bud Younger; two granddaughters: Melissa McMurry and Staci Riders. Hazel Kerr is survived by one daughter: Rosalee Delmain and husband, Darrel of Salem, Missouri; sister: Eunice Meyers and husband, Richard of California State; brother: Elvie Younger and wife, Judy of Eminence, Missouri; grandchildren: Darrel Delmain Jr. of Salem, Missouri, Laura Delmain of Salem, Missouri, Raymond Delmain of Villa Ridge, Missouri and Sonny Welch of Springfield, Missouri; twelve great grandchildren and twenty-nine great-great grandchildren and many other relatives and friends. Hazel will be deeply missed by all who knew and loved her. Funeral service for Hazel Marie Kerr was held Thursday, September 20, 2018 at Wilson Mortuary Salem Chapel with Bro. Charlie Younger and Pastor Rocky Lindley officiating and special recorded music was played. Serving as pallbearers were, Josh Delmain, Aaron Hodges, Jesse Dodd, Darrel Delmain Jr., Rick Kalter, James Delmain, Chris Gann, Jacobs Likes, and Nick Ibanez. Burial was in the Cedar Grove Cemetery in Salem, Missouri.

Hazel Marie (Younger) Kerr, one of three children of the late Isaac and Rebecca Jane (Nickels) Younger, was born November 6, 1925 in Alley Springs, Missouri where she grew up and attended school and passed away September 17, 2018 at Salem, Missouri... View Obituary & Service Information

The family of Hazel Marie Kerr created this Life Tributes page to make it easy to share your memories.

Hazel Marie (Younger) Kerr, one of three children of the late...

Send flowers to the Kerr family.