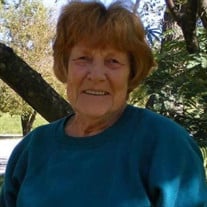 Iva Marie (Fannon) Fettinger was born on November 12, 1931, in Rolla, Missouri to George W. and Iva (Mihlfeld) Fannon and passed away on January 18, 2021 in Salem, Missouri at the age of eighty-nine years. Marie grew up in Doolittle, Missouri and graduated with the Class of 1949 from Rolla High School. Marie was united in marriage to Ray Parrett on December 31, 1949 and together blessed with five children: Steve, Ross, Mike, Katie, and George. Marie was passionate about her work in dietetics, throughout the years she has used her skills in a variety of businesses. She was employed with a nursing home in Jasper, the Ramada Inn, and Pike County Jail in Indiana. Marie was also an entrepreneur owning the Stockers Café in Mt. Vernon from 1970 until 1974. After moving to Salem, Marie worked part-time at The Salem News and took joy in her work and being part of the community. Marie was gifted with many talents and enjoyed needlework, knitting, and crocheting; making many Christmas stockings and sweaters for others. Marie liked diy stuff, especially hanging wallpaper; she was independent, creative, and fun. Marie enjoyed the outdoors and spending time in her garden. She was an avid St. Louis Cardinals Fan and enjoyed a friendly game of bowling. Marie had great love for her family and valued their time making memories. She loved to travel, especially with her sister, taking lots of trips together. Marie adored her fur baby, Buddy, and deeply treasured her grandchildren and great-grandchildren. Marie is survived by her loving son: Mike Parrett and wife Deanna of Salem, MO; sister: Susan Eaton of Oklahoma; many loving grandchildren and great-grandchildren; as well as a host of nieces, nephews, cousins, other relatives, and friends. Preceding her in death, husband: Ray Parrett; children: George, Steve, Ross, and Katie Parrett; and parents: George and Iva Fannon. Marie was a woman of great faith will be greatly missed by her family, friends, and all those she touched in her lifetime. Funeral Services for Iva Marie (Fannon) Fettinger were held Saturday, January 23, 2021 in the Wilson Mortuary Salem Chapel with Donna Clark and Ann Bowen officiating. Song selection played was “How Great Thou Art”. Serving as Pallbearers were Don Parrett, Joe Parrett, James Lunn, Evan Lunn, Colin Parrett, and Dan Parrett. Honorary Pallbearers were Anthony Jerger, Mike Wright, Billy Bowen, and Steve Hobson. Burial was in the Mt. Olive Cemetery of Doolittle, Missouri. Arrangements were under the direction of Wilson Mortuary of Salem, Missouri. Memorial Contributions may be made in memory of Marie Fettinger to the Alzheimer’s Association and left at Wilson Mortuary. Online condolences may be entered at wilsonmortuary.com

Iva Marie (Fannon) Fettinger was born on November 12, 1931, in Rolla, Missouri to George W. and Iva (Mihlfeld) Fannon and passed away on January 18, 2021 in Salem, Missouri at the age of eighty-nine years. Marie grew up in Doolittle, Missouri... View Obituary & Service Information

The family of Iva Marie (Fannon) Fettinger created this Life Tributes page to make it easy to share your memories.

Send flowers to the Fettinger family.