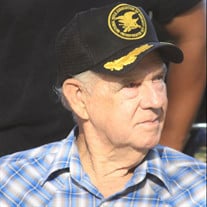 Jackie Eudell Inman was born on July 31, 1938, in Jack, Missouri to Paul and Louise (Patterson) Inman and passed away June 19, 2020, in Salem, Missouri at the age of eighty-one years. Jack was one of thirteen children and grew up in Jack, Missouri. He entered the United States Army on September 14, 1956 and served his country faithfully until his honorable discharge on September 13, 1958. Jack married Marlene Smith in 1959 at the home of her parents, Elvin and Lois Smith and to this union and thirty-two years of marriage, they were blessed with two children: Rhonda and LeAnn. In 1995 Jack married Wanda Smith and they moved to Salem. Together they cleared the land, built fence and made their home there for the next twenty-five years. Through the years, Jack worked at International Shoe Factory; in road construction for David Smith, his brother-in-law; the Army Ammunition (Shell) Plant in St. Louis; for Earl Dean Smith, his brother-in-law, as a dump truck driver; and as a UAW pipe fitter for General Motors for over thirty years and retired in 1996. Jack loved spending his time outdoors. Some of his favorite memories include fishing for crappie and catfish, deer and turkey hunting and running his coyote dogs. Fish fries were his specialty. Jack was a member of Dry Fork Baptist Church. Jack cherished his family and treasured the time spent with them, especially with his grandchildren. Jack is survived by his wife: Wanda Inman of Salem, MO; two daughters: Rhonda Inman Maricle and husband Wayne of Gravois Mills, MO, LeAnn Inman Shults and husband Rick of Salem, MO; two grandchildren: Travis Maricle of Gravois Mills, MO, Rachel Shults and fiancé CJ Smith of Salem, MO; two sisters: Pauline Inman Woolf of Salem, MO, and Ginger Inman Hoornaert of Auburn, KY; brother: Ted Inman and wife Liz of Bowling Green, KY; as well as many nieces, nephews, extended family and friends. Preceding him in death were his parents: Paul and Louise Patterson Inman; brothers: Kenneth, Jerry, Ronnie, Rick, and John Inman; and sisters: Peggy Inman Terry, Barbara Inman Bacon, Dean Inman, and Joan Inman Humphrey. Jack will be remembered for his big heart, friendly spirit, and contagious smile. He always had a story to tell. He will be deeply missed but fondly remembered by all who knew and loved him. Funeral Services for Jackie "Jack" Eudell Inman were held Tuesday, June 23, 2020 in the Wilson Mortuary Salem Chapel with Pastor Lyndell Decker officiating. Special Music was provided by Melinda Medlock and additional song selections played were "I Love My Truck" and "When I Get Where I'm Going". Serving as Pallbearers were Ted Inman, Wayne Maricle, Rick Shults, Travis Maricle, CJ Smith, and Tommy Inman. Honorary Pallbearers were Willie Eads and Jim Misuraco. Burial was in the Dry Fork Cemetery. Arrangements were under the direction of Wilson Mortuary of Salem, Missouri.

Jackie Eudell Inman was born on July 31, 1938, in Jack, Missouri to Paul and Louise (Patterson) Inman and passed away June 19, 2020, in Salem, Missouri at the age of eighty-one years. Jack was one of thirteen children and grew up in Jack,... View Obituary & Service Information

The family of Jackie Eudell Inman created this Life Tributes page to make it easy to share your memories.