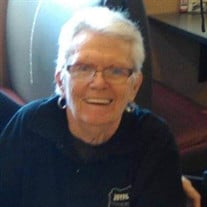 Jacqueline “Jackie” Sue (Dulworth) Easton was born on September 4, 1947, in Rolla, Missouri to Tommy Wayne and Pauline Elizabeth (VanNess) Dulworth. Jackie attended grade school in Summersville and graduated with the class of 1965 from Salem High School. Jackie was united in marriage to the love of her life, Aaron Easton on August 31, 1973, in Steelville, Missouri, and together shared forty-seven years of memories. Jackie and Aaron were blessed to share three children: Shelly, Aaron, and DeAnna. Jackie attended Beauty School and earned her cosmetology license. She worked as a beautician and owned and operated three shops in Cuba, Bourbon, and St. Charles. Jackie was a skilled beautician with many devoted clients who she shared her talents with for many years. Jackie was a woman of faith and alongside her husband founded Cross Covenant Ministries where she served as secretary since 1989. Jackie had a heart for serving and was one of the meekest, elegant, soft-spoken, tender-hearted, kindest, most caring, giving woman example of Jesus everyone has met. Jackie’s passion for serving led to volunteering at the food pantry and touching the lives of others in the community. Jackie enjoyed spending time outdoors and loved to ski and deer hunt. She cherished the time spent with her family and looked forward to family get-togethers. Jackie was a dedicated wife, devoted mother, and doting grandmother. She treasured her grandchildren and the fond memories made together. Jackie departed this life on April 28, 2021, at home in Cuba, Missouri at the age of seventy-three years. She leaves behind to cherish her memory, her loving husband Aaron Easton of the home; children: Shelley Jones of St. Clair, MO, Aaron L. Easton II and wife Kathrine of Temple, TX, and DeAnna L. Stanley and husband Aaron of Columbia, IL; grandchildren: Jonathan Jones, Trevor Easton, Jarren Easton, Megan Wolff, and Nicholas Wolff; extended family and friends. Preceding her in death, parents: Tommy and Pauline Dulworth; and brother: Tommy Wayne Dulworth. Jackie was a beautiful woman inside and out, to know her was to love her. Jackie will be forever missed. Funeral Services for Jacqueline “Jackie” (Dulworth) Easton were held Friday, May 7, 2021 in the Wilson Mortuary Salem Chapel with Elder Aaron Stanley officiating. Song selections played were “I Give You Jesus” and “It Is Well With My Soul”. Serving as Pallbearers were Jonathan Jones, Todd Parks, Jesse Asbridge, Glenn Tenow, Dean Breihaupt, and Clay Asbridge. Honorary Pallbearers were Aaron Stanley and David Breithaupt. Burial was in the Green Forest Cemetery. Arrangements were under the direction of Wilson Mortuary of Salem, Missouri. Online condolences may be entered at wilsonmortuary.com

The family of Jacqueline "Jackie" Sue (Dulworth) Easton created this Life Tributes page to make it easy to share your memories.

Send flowers to the Easton family.