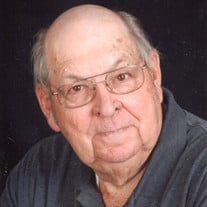 James Kenneth (Joe) Camden was born March 28, 1942 to James L. and Elsie L. (Botkin) Camden in Bunker, Missouri. He departed this life June 12, 2020 at home in Salem, Missouri at the age of seventy-eight. Joe entered the United States Army National Guard on February 25, 1964 and served his country faithfully until his honorable discharge on February 24, 1970. Joe married his sweetheart, Bobby Lou Hobson, on November 26, 1977 and together they shared forty-two years of marriage and were blessed with two daughters Jeannette Mae Marie and Amanda Jo. They were the delight of his life. Joe was a hard-working man who worked hard to provide for his family. He worked as a heavy equipment operator for over thirty years. Joe had a passion for his dirt working machines, especially his backhoe and dozer, and truly enjoyed playing in the dirt. Joe was a fun-loving and caring man who cherished the time spent with his family and friends. He was known for his kind words and joking nature. His greatest pleasures in life were his family, especially his grandchildren. Joe was saved as a young man and attended Pleasant Valley Baptist Church where he was a devoted member for many years. Joe was a member of the Independent Order of Odd Fellows (IOOF) #118 and the International Union of Operating Engineers (IUOE) Local 513. Joe is survived by his loving wife Bobby Lou of the home; his daughters: Jeannette Mae Marie Wisdom of Missouri, and Amanda Jo Roninger and husband Scott of Casa Grande, Arizona; grandchildren: Jordan Wisdom Conway and husband Logan of Salem, Missouri, Jared Wisdom of Salem, Missouri, and Jason Wisdom of Iberia, Missouri; great-granddaughter: Addi Jo Conway; “favorite ex-son-in-law”, father of his grandchildren: Jeremy Wisdom of Salem, Missouri; aunt: Doilline Camden of Salem, Missouri; as well as many relatives, friends, and church family with whom he loved very much. He was preceded in death by his parents; father and mother-in-law: Kenneth & Ruth Hobson; many family members and friends. Joe will be remembered for his big heart, friendly spirit, and contagious smile. He was loved by all who knew him and will be missed. Funeral Services for James Kenneth "Joe" Camden were held Wednesday, June 17, 2020 in the Wilson Mortuary Salem Chapel with Pastor Mark Johnson officiating. Violinist Ally Johnson provided special music and additional song selections played were "Amazing Grace" and "How Great Thou Art". Serving as Pallbearers were Scott Roninger, Jeremy Wisdom, Jared Wisdom, Jason Wisdom, Logan Conway, Fred Howard Jr., Jim Wood, and David Groves. Burial was in the North Lawn Cemetery. Arrangements were under the direction of Wilson Mortuary of Salem, Missouri. Memorial Contributions may be made in memory of James “Joe” Kenneth Camden to Phelps Health Hospice online at (https://phelpshealthfoundation.org/funds/hospice-fund/#donate) or Riverways Pregnancy Center and left at Wilson Mortuary. Online condolences may be entered at www.wilsonmortuary.com

The family of James "Joe" Kenneth Camden created this Life Tributes page to make it easy to share your memories.