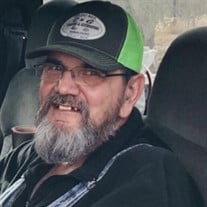 James “Jim” Dell Blaylock was born May 10, 1962 in St. Louis, Missouri to Billy and Joyce (Richter) Blaylock and passed away March 12, 2021 in Rolla, Missouri at the age of fifty-eight years. Jim grew up in Lenox, Missouri and received an associate degree in Machine Tool Technology from Linn State Technical College. Jim met the love of his life, Lisa Ann Gant, while she was working at Wal-Mart. Jim and Lisa were united in marriage on March 16, 1991 and together shared thirty years of memories. They were blessed with two daughters, Amber and Emily, whom he was very proud of. Jim started working as a custodian with the Southeast Missouri Behavioral Health Salem Center and worked his way up earning his teaching credit as a counselor. He was a devoted and hard worker, providing for his family, and caring for the community. Jim was a great example of a true Christian; he accepted Christ at a young age and rededicated his life in the late 1980s. Jim was an ordained minister and worked in Children’s Ministry at Grace Community Church. He deeply loved his work in the ministry and working alongside his wife, especially teaching the Preschool Sunday School Class. Jim truly cared about others, always putting them first, and willing to help anyone with anything he could. A lover of nature, Jim enjoyed spending time in the woods hunting and at Montauk trout fishing. Perhaps his greatest joy was spending time with his family and making memories with his grandson. Jim leaves behind to cherish his memories, his loving wife Lisa Blaylock of the home; daughters: Amber Blaylock of Springfield, MO and Emily Roach and husband Chris of Salem, MO; mother: Joyce Blaylock of Salem, MO; siblings: Mary Hudson of Salem, MO; Billie Jean Boley and husband Johnny of Edgar Springs, MO, Connie Wallace and husband Mike of Licking, MO, Brenda Julien of Kansas City, MO, John Blaylock and wife Melissa of Licking, MO, Liz Major and husband J.D. of Salem, MO, Trish Callahan and husband Darrell of Steelville, MO, Linda Mielke and husband Mike of Roxanna, IL, Jerry Blaylock and wife Amanda of Summersville, MO, and Angela Harrison and husband John of Salem, MO; father and mother-in-law: Larry and Earlene Gant of Salem, MO; brother-in-law: Dusty Stoner of Licking, MO; grandson: Remington Roach; as well as several nieces, nephews, cousins, other relatives, and friends. Preceding him in death, father: Billy Blaylock; infant sister: Deborah Blaylock; brother: Tom Blaylock; sister: Joyce Ann Stoner; and brothers-in-law: Truman Hudson and Ray Gant Jr. Jim was one of a kind, loving husband to his wife, and a great role model, protector, and hero to his two daughters and grandson. He will be greatly missed by anyone who has known him, as he has left a great legacy to live on. Funeral Services for James “Jim” Dell Blaylock were held Thursday, March 18, 2021 in the Wilson Mortuary Salem Chapel with Pastor Charlie Younger officiating. Special music was provided by Amber Blaylock singing “My Hero”, additional song selections played were “The Other Side” and “Redeemer”. Serving as Pallbearers were Greg Diehl, Ryan Blaylock, J.T. Harrison. Cody Harrison, Derek Wallace, and Kermit Lonning. Honorary Pallbearers were Rick Letchworth and Wendell Light. Burial was in the Cedar Grove Cemetery. Arrangements were under the direction of Wilson Mortuary of Salem, Missouri. Memorial Contributions may be made in memory of Jim Blaylock and left at Wilson Mortuary. Online condolences may be entered at wilsonmortuary.com

The family of James "Jim" Dell Blaylock created this Life Tributes page to make it easy to share your memories.

Send flowers to the Blaylock family.