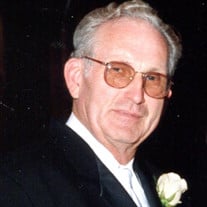 James “Jim” Dwayne Miner was born on September 3, 1937, in Greeley, Missouri to David Clarence “D.C” and Loris (Brown) Miner and passed away on November 6, 2020 in St. Louis, Missouri at the age of eighty-three years. Jim grew up and attended school in Bunker, Missouri. He was drafted into the United States Army in 1960 and served for two years before later joining the Air National Guard. Jim served his country faithfully until his honorable discharge on September 1, 1997. Jim was united in marriage to the love of his life, Berniece “Sis” Pryor on August 29, 1958 in Boss, Missouri and together shared sixty-two years of memories. Jim and Berniece were blessed with three children: Kimberlee, Timothy, and Tara. He was a devoted husband to Berniece and loving father to his children. During his working career, Jim worked hard to provide for his family and taught his children the value of hard work. He was employed with Vincel Pontiac for many years as a parts delivery man until his retirement. Jim then worked at Rock Wood School District as a custodian. Jim lived a simple life and enjoyed taking rides in his little red truck. He liked to work on cars, fish, and listen to bluegrass music. Jim valued friendship and drinking coffee with the “White Castle Coffee Club”. Most important to him was his family and he truly cherished the memories made with them; especially with his grandchildren and great-grandchildren. Jim is survived by his loving wife: Berniece Miner of High Ridge, MO; children: Kimberlee Sexton of Festus, MO; Timothy "Tim" Miner and wife Tammy of High Ridge, MO, and Tara Boscia and husband Matt of Weldon Spring, MO; grandchildren: Marissa Sexton, Dalton Miner, Tyler Miner and fiancé Brittney, Audrey Boscia, Lincoln Boscia, Rhe'a McDowell and husband Blake, and Dalton Hunsaker and wife Lauren; great-grandchildren: Brantley, Amelia, and Eli; as well as several nieces, nephews, cousins, other relatives and friends. Preceding him in death, his parents: D.C. and Loris Miner; and siblings: Easter Botkins, Byrtle Graham, Everett Miner, Lucille Bowen, Rosa Lee Pryor, Eugene Miner and Burnetta Pryor. Jim leaves behind a legacy of love, dedication, and service. His memories will live on in the many lives he touched along the way. Jim will be forever missed. Funeral Services for James “Jim” Dwayne Miner were held Monday, November 9, 2020 at the Boss Assembly of God Church with Pastor Paul Davis and Dalton Miner officiating. Special Music was provided by Pam Davis, Michelle Pyatt, Tina Whitaker, Tyler Miner, and Dalton Hunsaker. Serving as Pallbearers were Dalton Miner, Tyler Miner, Dalton Hunsaker, Blake McDowell, Matthew Bosica, and Terry Davis. Honorary Pallbearer was Lincoln Boscia. Military Honors was provided by the United States Air Force and American Legion Post 99. Burial was in the Boss Cemetery. The Family was served by Wilson Mortuary of Salem, Missouri. Memorial Contributions may be made in memory of James "Jim" Miner to the Boss Cemetery Fund and left at Wilson Mortuary. Online condolences may be entered at wilsonmortuary.com

The family of James "Jim" Dwayne Miner created this Life Tributes page to make it easy to share your memories.

Send flowers to the Miner family.