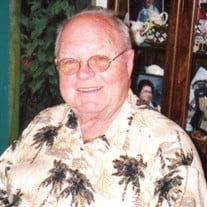 James “Sandy” Franklin Sanders was born June 10, 1937, in Magnolia, Texas to Jesse and Donie (Bentley) Sanders and passed away August 14, 2020, at his home in Salem, Missouri surrounded by his loving family at the age of eighty-three years. Sandy grew up and attended school in Magnolia, Texas. He entered the United States Army National Guard and was ordered to active duty serving during the Vietnam War and in Operation Desert Storm. Sandy served his country faithfully until his retirement. During his time in the military, and for his faithful and honorable service, Sandy earned many decorations, medals, ribbons, and awards to include: Army Good Conduct Medal, Armed Forces Reserve Medal, National Defense Service Medal, Overseas Service Ribbon-1, ARNG Recruiter Badge. Sandy married the love of his life, Claudette Jane King, in 1986 and together shared thirty-four years of marriage and were blessed with two children: Joshua and Jessica. Sandy took great pride in caring for his family, during his working years, he was employed with DynCorp. His job allowed him to travel the world and after sixteen years, he retired. Sandy was an honorary member the Eagles Club and a faithful member of Grace Community Church. He truly enjoyed the fellowship there and loved the old-time hymns. Sandy spent his time raising chickens, listening to bluegrass music, and playing with his dog “Toby”. He was a great guy who always had something to sell along with a good joke to tell. Sandy cherished his time spent with family and friends; especially with his children, grandchildren, and great-grandchildren. Sandy is survived by his loving wife Claudette Sanders of the home; two children: Joshua Sanders and wife Jackie of Rolla, MO and Jessica Sneathen and husband John of Rolla, MO; one sister: Martha Svanda of Midland, TX; one brother-in-law: Jimmy King; ten grandchildren: Jessica, Kelly, J.D., Cody, Mikayla, Freedom, Mikenna, Pandora, Buffy, and Thiery; as well as a host of great-grandchildren, nieces, nephews, other relatives, and friends. Preceding him in death were his parents: Jesse and Donie Sanders and brothers: “Buddy” and “Vernie” Sandy will be remembered for the joy and laughter he shared with others. The memories he created with those who loved him will be cherished forever. Funeral Services for James “Sandy” Franklin Sanders were held Tuesday, August 18, 2020 in the Wilson Mortuary Salem Chapel with Pastor Gary Bartle officiating. Song selections played were “Carry On Wayward Son”, “Dancing In The Sky”, “I Can On Imagine”, “Well Done”, and “Take It To The Limit”. Serving as Pallbearers were Shea Wood, Loren Wood, Dave Thompson, Dennis Boxx, James Wood, and Marvin Happel. Honorary Pallbearers were Jimmy King, Cody Sneathen, and Bill Harweger. Burial with Military Honors was in the Missouri Veterans Cemetery, Fort Leonard Wood. Arrangements were under the direction of Wilson Mortuary of Salem, Missouri. Memorial Contributions may be made in memory of James "Sandy" Franklin Sanders and left at Wilson Mortuary. Online condolences may be entered at wilsonmortuary.com

James &#8220;Sandy&#8221; Franklin Sanders was born June 10, 1937, in Magnolia, Texas to Jesse and Donie (Bentley) Sanders and passed away August 14, 2020, at his home in Salem, Missouri surrounded by his loving family at the age of eighty-three... View Obituary & Service Information

The family of James "Sandy" Franklin Sanders created this Life Tributes page to make it easy to share your memories.

Send flowers to the Sanders family.