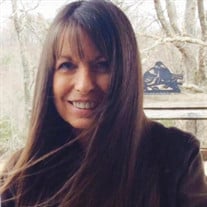 Janet Ann (Hodges) Hanstine was born in Rolla, Missouri on May 27, 1961, to Carol and Cathern (Flett) Hodges. Janet grew up in Salem and graduated with the Class of 1979 from Salem High School. She was united in marriage to her sweetheart, Kennedy “Ken” Hanstine on December 21, 1991, and together gifted with twenty-eight years of memories. Janet and Ken were blessed to share two daughters, Andrea and Kristen. In her young adult years, Janet worked at Craig Distributing (U.S. Foods) in Salem before moving to Springfield in 1989. She then became employed with Reckitt Benckiser, working in the logistics department. Janet loved her job and continued working until her health no longer allowed her to do so. Janet lived life to the fullest and always had a big smile on her face. During her life, she was a strong believer in her faith and a member of New Harmony Church. Janet liked to bowl, kayak, and spend time at the lake. She took great pride in caring for and loving on her doggies. Most important to Janet was her family; she was a dedicated wife, mother, and grandmother. Janet loved being a nena to her grandchildren and cherished the memories they made together. Janet passed away peacefully on October 28, 2020, surrounded by her loving family at home in Licking, Missouri. She leaves behind to cherish her memory her loving husband: Ken Hanstine of the home; daughters: Andrea Haley and husband Nick of Salem, MO and Kristen Inman and husband Travis of Rolla, MO; parents: Carol and Cathern Hodges of Salem, MO; brothers: David Hodges and wife Lisa of Rolla, MO, Clint Hodges and wife Brenda of Salem, MO, and Mike Hodges and wife Tina; grandsons: Brian Kohut and Caden Haley; as well as several nieces, nephews, cousins, other relatives, and friends. Preceding her in death, her grandparents: Clark and Beulah Hodges and Howard and Arlene Flett; father and mother-in-law: Dudley and Jody Hanstine. Janet will be deeply missed by all who had the pleasure in knowing her. She was a pure joy to be around and left an impression on everyone she met. Her big smile and personality was contagious and you couldn’t help but to be happy and smile right back when around her. She had a great sense of humor and loved to make people laugh. Her amazing outlook on life will leave an unforgettable impact on those who knew and loved her. Celebration of Life for Janet Ann (Hodges) Hanstine was held Sunday, November 1, 2020 in the Wilson Mortuary Salem Chapel with Brother-in-Law Danny Kuhn officiating. Song selection played was “Supermarket Flowers”. The Family was served by Wilson Mortuary of Salem, Missouri. Memorial Contributions may be made in memory of Janet Ann Hanstine and left at Wilson Mortuary. Online condolences may be entered at wilsonmortuary.com

Janet Ann (Hodges) Hanstine was born in Rolla, Missouri on May 27, 1961, to Carol and Cathern (Flett) Hodges. Janet grew up in Salem and graduated with the Class of 1979 from Salem High School. She was united in marriage to her sweetheart, Kennedy... View Obituary & Service Information

The family of Janet Ann (Hodges) Hanstine created this Life Tributes page to make it easy to share your memories.

Janet Ann (Hodges) Hanstine was born in Rolla, Missouri on May...

Send flowers to the Hanstine family.