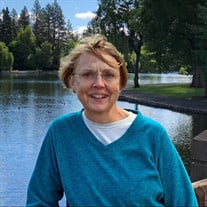 Janice Ann (Boyd) VanSciver was born on March 24, 1947, to Lloyd and Audrey Boyd in St. Louis, Missouri and passed away on December 17, 2020, at home with her family, from complications of cancer, at the age of seventy-three years. She grew up in a number of small towns in southern Missouri and graduated as valedictorian of Salem High School in 1965. She attended the University of Missouri—Columbia and graduated with a bachelor’s degree in microbiology, then completed a master’s degree in social psychology at the University of Missouri—Kansas City. She began her 40+ year laboratory career at Menorah Medical Center in Kansas City, later working at University Hospital in Columbia, and then retiring from Boyce & Bynum Pathology Labs in Columbia in 2013, after 12 years there as microbiology supervisor. Jan married Edward VanSciver in June 1980 in Kansas City, Mo. They moved to Columbia in 1982 before having their children, Allison and Tim. After 36 years in Columbia, the family moved to Eugene, Oregon in 2018. Jan loved nature, spending many hours outdoors, whether at orienteering meets with Ed in their early marriage, walking and hiking with friends and family, or—her favorite—near any body of water. She had quite a green thumb, cultivating dozens of house plants and a beautiful garden. After her retirement, she also developed an interest in and talent for woodworking, and built projects large and small, from cutting boards to coffee tables. She was an avid runner throughout her life, a dedicated volunteer, and a devoted church member. Most of all, she loved her family. She is remembered for her kindness, positivity, and ability to always find a solution to any problem and is already deeply missed by many. She is survived by her husband, Ed, and children, Allison and Tim, all of Eugene, Ore.; her sister Judi O'Brien, of Jefferson City, Mo.; two nephews; and numerous cousins. She was preceded in death by her parents. Jan was laid to rest at Mount Hermon Cemetery in Dent County, Missouri, alongside many cherished family members. A virtual celebration of life is planned. Online condolences may be made at wilsonmortuary.com. Memorial contributions may be made to the American Cancer Society, the Food Bank for Central and Northeast Missouri, or your favorite local organization.

Janice Ann (Boyd) VanSciver was born on March 24, 1947, to Lloyd and Audrey Boyd in St. Louis, Missouri and passed away on December 17, 2020, at home with her family, from complications of cancer, at the age of seventy-three years. She grew... View Obituary & Service Information

The family of Janice Ann (Boyd) VanSciver created this Life Tributes page to make it easy to share your memories.

Send flowers to the VanSciver family.