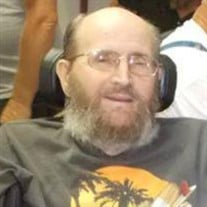 George "Jeff" Jefferson Perrine was born August 30, 1944, in Waynesville, Missouri to Chaptman George and Cora Elizabeth (Crossland) Perrine and passed away April 20, 2020, Springfield, Missouri at the age of seventy-five years. Jeff as he was known by all, grew up on Turkey Ridge and attended school there for three years. He then attended Laquey Elementary and Richland High School. Jeff was drafted into the United States Army in July of 1965 and served his country faithfully until his honorable discharge on June 13, 1967. After basic training, Jeff married his sweetheart, Janice Fern Brown on September 18, 1965, and together they shared fifty-four years of marriage. Jeff and Janice had two sons: John and Joseph and in 1993 adopted their daughter, Christina Fortune. Prior to the Army, Jeff worked in construction with his father and then as a stock boy on Fort Leonard Wood. While in the Army, Jeff was transferred to Georgia before serving in Germany for eighteen months. After his return, he worked for H.D. Lee as a sewing machine mechanic. Jeff also owned a gas station on the spur and did several other jobs. He was a hard worker and worked hard to provide for his family. Jeff was a man of many talents and always willing to lend a helping hand. After his motorcycle accident in 1975, he started rebuilding old cars as a hobby. Jeff enjoyed spending time outdoors and could be found fishing or hunting. He volunteered with school kids, showing them how mountain men lived by putting on his buckskins. Jeff loved life and spending time with his family. He had a strong bond with his siblings that remained strong and unbreakable. Jeff especially cherished the time spent with his grandchildren and great-grandchildren. Jeff was a man of faith and was baptized as a young man at Friendship Baptist Church. He later became a member of Center Point Baptist Church with his family. Jeff loved the Lord and enjoyed the fellowship there. Jeff was very active in the community. He was president of three clubs: Tehone Motorcycle Club, Kickapoo Trace Muzzleloaders, and the Cave State Cruisers Car Club where he was a charter member. Jeff is survived by his loving wife: Janice Perrine of the home; son: John Perrine of Waynesville, MO, daughter: Christina Fortune of St. Robert, MO; brother: Roy Perrine and wife Kim of Waynesville, MO; sister: Cora Shetler of Waynesville, MO; sisters-in-law: Peggy Humphrey and husband Gary of Richland, MO; Sharon Hillard and husband Keith of Paris, MO; Sandy Willoughby of Waynesville, MO; Jackie Driskell and husband Ronnie of Fort Worth, TX, and Georgia Schriner of Fort Worth, TX; nine grandchildren; three great-grandchildren; as well as many nieces, nephews, extended family, and friends. Preceding him in death were his, son: Joseph Allen Perrine; parents: Chaptman and Cora Perrine; father-in-law: Lonnie Brown; mother-in-law: Genovia Brown; brothers-in-law: Dale Shetler and Virgil Brown; sisters-in-law: Kathy Brotherton and Charlotte Dugas; niece: Juanita Humphrey. Jeff will be remembered for his sense of humor and the love he had for his family. He will be deeply missed but forever remembered by all who knew and loved him. Graveside Services for George “Jeff” Jefferson Perrine were held Friday, April 24, 2020 at the Center Point Cemetery with Pastor D.J. Desjardins and Pastor Gary Humphrey officiating. Gary and Peggy Humphrey shared “Go Rest High On That Mountain” and additional song selections played were “Fishing In The Sky” and “On The Other Side”. Serving as Pallbearers were George Schmidt, Danny Clark, Matt Perrine, Larry Evans, Billy Woody, and Troy Frey. Honorary Pallbearers were Clay May and Jimmy Shetler. Special recognition was given by the Cave State Crusiers Car Club. Military Honors was provided by the United States Army and VFW Post 2025. Arrangements were under the direction of Wilson Mortuary of Salem, Missouri. Memorial Contributions may be made in memory of Jeff Perrine. Memorial envelopes will be available at New Friendship Baptist Church. Online condolences may be entered at wilsonmortuary.com

The family of Jeff Perrine created this Life Tributes page to make it easy to share your memories.

Send flowers to the Perrine family.