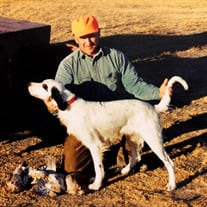 Jerry was born to Mildred Faith Asbridge Hurt and Vernon Clyde Hurt on November 21, 1951. Jerry is survived by: his daughter Amanda Smith, her husband Craig Smith, their two daughters Savannah Smith and Caroline Smith, of Slaughter, Louisiana; his son, Casey Vernon Hurt and his fiance' Sara O'Brien of Maurepas, Louisiana; two sisters, Janice Frazier of Houston, Texas and Judy Smith of Eminence, Missouri; also several nieces, nephews, cousins, extended family, and friends. Jerry leaves this life from the beautiful Ozark hills that has claimed his heart and mind for the entirety of his life. Rearing and early education occurred in the Round Spring Area of northern Shannon County and in his family's country store that served the area. At an early age, Jerry learned the skills necessary to stalk a buck in the deep hollers around Sinking Creek and to make a fish rise in the cold waters of the Current River. He became a skilled tracker and gained a remarkable understanding of the environment he called home. He loved to hear the whip-poor-wills in the spring, and the haunting bawl of coonhound opening on track, high up on the ridge on a cold winter night. In short, the hills of southern Missouri became a part of Jerry that would never leave him. Jerry finished his high school education at Eminence High School, graduating in the Spring of 1969. He went on to get a degree in Agriculture in 1973 from Southwest Missouri State, in Springfield, Missouri. He married, and for the next few years, Jerry enjoyed raising his children Amanda and Casey while exploring opportunities outside the comfortable confines of Shannon County, Missouri. He became an avid upland bird hunter and enjoyed raising bird dogs, which he would do for the rest of his life. After time spent exploring the United States with his family, he returned and would enjoy the hills and hollers with a new understanding of the world outside. It shaped the rest of his life with a strong conviction for family, friends, and the steadiness of a good bird dog. He would fish the river with a new patience that can only come from experiences of life and the necessity of understanding self-discipline. He would also delight in his children and the lives that they had gone on to build for themselves. And, he would most certainly, with a smile and a little wink of pride, been glad to tell you about his grandchildren. Jerry and the hills....came full circle. -CS Memorial Service for Jerry Wayne Hurt was held Saturday, September 14, 2019 in the Wilson Mortuary Salem Chapel with Dennis Purcell officiating. Several memories were shared by family and friends and Casey Hurt played Wildwood Flower on the guitar. All arrangements were under the direction of Wilson Mortuary of Salem, Missouri.

The family of Jerry Wayne Hurt created this Life Tributes page to make it easy to share your memories.

Send flowers to the Hurt family.