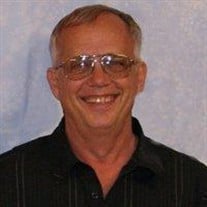 Jim Bob McPherson, 60, of Winfield, Kansas, passed away Saturday evening, February 1, 2020 at his home surrounded by his family and friends. Jim Bob was born August 22, 1959 in Farmington, New Mexico to Bill and Lena (Lanier) McPherson. The family moved to Salem, Missouri where he was raised and received his education. He graduated from Salem High School in 1977. Jim started working at a very young age, helping with the family business drilling wells. He developed a passion for working on vehicles as a teenager, eventually turning that into a career. Jim was united in marriage to Paula “Kay” Payne on June 3, 1977 in McKinney, Texas. Jim and Kay made their first home in Atlanta, Kansas and Jim began working with his father in the oil fields. In 1993, the family returned to Salem where Jim began working as an auto mechanic for Knight & Maher. In 2002, he started his own mechanic shop, McPherson Repair. In 2004 he opened the Salem Bowling Center, expanding on another great passion. They returned to the Winfield area in 2006 and he began working with his brother at McPherson Drilling, where he remained until retiring due to health concerns in 2015. He was a member of the United States Bowling Congress. He enjoyed bowling, fishing, and visiting with friends. His family includes his wife Kay McPherson of Winfield; son Mike McPherson and wife, Megan of Houston, MO; daughters Angie Chitwood of Burden, KS; Katie James and husband, Kevin of Salem, MO; Kandi McCall and husband, Nathan of Jadwin, MO; his brother Billy Lloyd McPherson and wife, Penny of Winfield; his sister Genie Brazell and husband, Russ of Augusta, KS; and his 14 grandchildren, Sierra, Shyanne, Christopher, Decemeber, Novemeber Jewel, Januarie Blaze, Brooklyn, Jackson, Elijah, Tristen, Cameron, Noah, Mikayela, and Tyler. Jim was preceded in death by his parents. Funeral Service for Jim Bob McPherson was held Friday, February 7, 2020 in the Wilson Mortuary Salem Chapel with Mike Cronk and Paul Richardson officiating. Memories were shared by Family and Friends. Song selections played were "I'll Fly Away", "Even Though I'm Leaving", and "Old Rugged Cross". Serving as Pallbearers were Brad Ives, Chris Lanier, Steve Lanier, Allen Moore, Todd Norris, and Robbie Payne. Burial was in the North Lawn Cemetery Salem, Missouri. Arrangements were under the direction of Wilson Mortuary of Salem, Missouri.

Jim Bob McPherson, 60, of Winfield, Kansas, passed away Saturday evening, February 1, 2020 at his home surrounded by his family and friends. Jim Bob was born August 22, 1959 in Farmington, New Mexico to Bill and Lena (Lanier) McPherson. The... View Obituary & Service Information

The family of Jim Bob McPherson created this Life Tributes page to make it easy to share your memories.

Send flowers to the McPherson family.