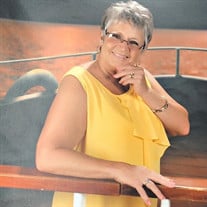 Jo Anne (Robnett) Brown was born on February 18, 1948, in Salem, Missouri to Vernon Claxton and Beulah Elizabeth (Lambeth) Robnett. Jo Anne lived most of her life in Dent County and graduated from Salem High School. In her younger years, she was a member of select choir, loved playing softball, riding horses, and floating the Current River. Jo Anne was united in marriage to Ronnie Brookshire on June 11, 1965 and to this union one daughter was born, Kimberly Ann. Jo Anne later married David Lee Brown on February 14, 2007 and together shared nearly fourteen years of memories. From this marriage, Jo Anne gained four children: Sean, David, Dawn, and Melissa. Jo Anne made her career as an EMT and medical transcriptionist and later became the assistant supervisor of medical records at the Salem Memorial District Hospital from February 22, 1977 until June 26, 1987. She then went to cosmetology school and had her own shop, Jo Anne’s Country Cut in Anutt. Jo Anne later returned to SMDH from December 5, 1996 until June 29, 1998 in the ER registration until she decided to be a full-time Grammy. In her spare time, Jo Anne enjoyed going on cruises. Most important to her was her family and she treasured the memories made with them, especially with her grandchildren and great-grandchildren. Jo Anne was a long-time and active member of Anutt Community Church where she was the pianist and music director and served on the Board of Directors. She always had a deep love and appreciation for music and enjoyed singing specials at church. Jo Anne had a big heart for the church and community and was always willing to jump in where there was a need. Jo Anne departed this life on May 21, 2021, in the St. Louis University Hospital at the age of seventy-three years. She leaves behind to cherish her memories, her husband Dave Brown of the home; children: Kimberly Hodge of Anutt, MO, Davie Brown of Salem, MO, Sean Brown of Columbia, MO; Dawn Pharr and husband Ryan of East Point, FL, and Melissa Nash of Bunker, MO; grandchildren: Mahala Hodge, Zettye Brown, Dalton Brown, Blake Brown, Brock Brown, Lily Brown, Kurtis Hodge, Cassandra Oliver and husband Levi, Allie Fleener, Blaine Fleener, Carlie Fleener, Benton Nash, Avery Pharr, Finley Pharr, and Grady Pharr; great-grandchildren: Kinzley Oliver, Ryder and River Hodge; nieces: Mary Woehr and husband Rick, Carolyn Highley and husband Gary, Wanda Chaves and husband Terry, and Brenda Osborne and husband Dave; as well as many wonderful great and great-great-nieces and nephews, other relatives, and dear friends. Jo Anne is preceded in death by her parents: Vernon and Beulah Robnett; brothers: Bobby and Bill Robnett; sister: Norma Robnett; and honorary grandson: Kevin Ahart Jr. Jo Anne was a sweet and caring lady who always shared a smile and hug with those around her. She was special to many and will be forever missed. Funeral Services for Jo Anne (Robnett) Brown were held Wednesday, May 26, 2021 in the Wilson Mortuary Salem Chapel with Pastor Doyle Wools and Joel Steelman officiating. Special Music was provided by Dana Wood and additional song selection played was “On The Other Side”. Serving as Pallbearers were Joel Steelman, Gary Bowles, Levi Oliver, Terry Chaves, Gary Highley, and Curt Baldwin. Honorary Pallbearers were Kevin Ahart Jr., Kyler Baldwin, and Rick Woehr. Burial was in the Anutt Cemetery. Arrangements were under the direction of Wilson Mortuary of Salem, Missouri. In Lieu of Flowers Memorial Contributions may be made in memory of Jo Anne Brown to St. Jude Children's Hospital and left at Wilson Mortuary. Online condolences may be entered at wilsonmortuary.com

Jo Anne (Robnett) Brown was born on February 18, 1948, in Salem, Missouri to Vernon Claxton and Beulah Elizabeth (Lambeth) Robnett. Jo Anne lived most of her life in Dent County and graduated from Salem High School. In her younger years, she... View Obituary & Service Information

The family of Jo Anne (Robnett) Brown created this Life Tributes page to make it easy to share your memories.

Send flowers to the Brown family.