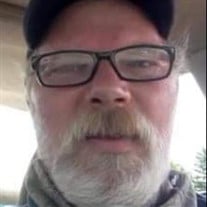 Joel Anthony Williams was born April 10, 1970 in Wheatfield, Illinois to Joe and Gail (Campbell) Williams. He grew up in Goodman, Missouri and graduated with the class of 1988 from Neosho High School. After high school, Joel entered the United States Marine Corp and served his country faithfully until his honorable discharge. During his time in the military, Joel earned many decorations, medals, badges, ribbons, and awards and served during Operation Desert Storm. Joel was united in marriage to his sweetheart, Danielle A. Salamone October 20, 2000 in Neosho, Missouri and shared twenty-one years of laughter and memories. Joel and Danielle were blessed to share two daughters: Katherine and Veronica. Joel was a skilled handyman and worked in the maintenance department at Phelps Health. He previously worked at Victor Plumbing and liked helping others. Joel had furthered his education at Southwest Baptist University obtaining his bachelor’s in psychology. Joel enjoyed the outdoors and spending time hunting and fishing. He had a great passion for antiques and frequently visited antique stores; one of his favorite hobbies was repairing antique watches. Most important to Joel was his family and he loved the time spent with his daughters and adored his grandchildren. Joel departed this life December 25, 2021 in Salem, Missouri at the age of fifty-one years. He leaves behind to cherish his memory, his loving wife: Danielle Salamone-Williams of Salem, MO; daughters: Katherine Williams of Salem, MO and Veronica Kennedy of Florida; grandchildren: Lilly, Joeseph, and Jacob; parents: Joe and Gail Williams of Neosho, MO; sister: Stoni Gates and husband Vance of Huntsville, AR; brother: Zeb Williams and wife Angie of Anderson, MO; nieces and nephews: Holli, Zade, Hailey, Gauge, and Zoey; as well as a host of aunts, uncles, cousins, other relatives, and dear friends. Joel will be forever loved but not forgotten. His memory will live on in the lives he has touched along the way. Funeral Services for Joel Anthony Williams were held Saturday, January 1, 2022 in the Wilson Mortuary Salem Chapel with Pastor Chris Hendrix officiating. Song selections played were “Before You Go” and “Amazing Grace”. Serving as Pallbearers were Zeb Williams, Zade Williams, Gauge Williams, Jacob Salamone, Chris Notter, Zach Notter, Carl Mendenhall, and John Ketzler. Honorary Pallbearers were Vince Salamone and Tyler Walker. Military Honors was provided by the Missouri Honors Team and American Legion Post 99. Burial was in the Salamone Family Cemetery in Lenox, Missouri. Arrangements were under the direction of Wilson Mortuary of Salem, Missouri. Memorial Contributions may be made in memory of Joel Williams and left at Wilson Mortuary. Online condolences may be entered at wilsonmortuary.com

Joel Anthony Williams was born April 10, 1970 in Wheatfield, Illinois to Joe and Gail (Campbell) Williams. He grew up in Goodman, Missouri and graduated with the class of 1988 from Neosho High School. After high school, Joel entered the United... View Obituary & Service Information

The family of Joel Anthony Williams created this Life Tributes page to make it easy to share your memories.

Send flowers to the Williams family.