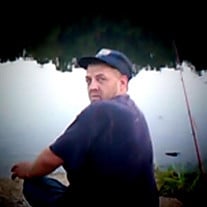 John Christian Collins was born on November 9, 1972 in Springfield, Illinois to Walter Lee Collins-Garcia and Barbara Ann (Payton) Collins, he was later raised by his foster father, Mike Thompson, and passed away on January 28, 2020 at Phelps Health in Rolla, Missouri at the age of forty-seven years. John grew up in Salem, Missouri and graduated from Salem High School. He married his sweetheart, Kathy Young, on October 22, 1994 in Salem and together they shared twenty-six years of marriage and were blessed with four children: Brett, Brittany, Desiree, and Donnel. John knew hard work and worked hard to provide for his family. He held various jobs after graduating and in 1997, started working as a laborer with Heartland Metal Finishing Inc. John was a dedicated, loyal, and caring employee who worked tirelessly for twenty-two years. John loved the Lord and was strong in his faith, he enjoyed attending church and was a proud member of the House of Prayer. John was fond of outdoor activities and all things nature. He liked attending car shows, mud runs, and demolition derbies. More than anything, John treasured the time spent with his family, especially with his grandchildren fishing near the pond. His family was important to him and he cherished their time together. John is survived by his loving wife Kathy (Young) Collins of the home; three daughters: Brittany Collins and fiancé Joe Wilson of Salem, MO, Desiree Collins-Champney of Salem, MO, and Donnel Paulson and husband Mark of Wisconsin; father: Mike Thompson of Salem, MO; siblings: James Collins, Duncan Collins, Conni Moore, Candice Moore, and Lori Lee; two grandchildren: Maisie Collins and Amnesty Wilson; many in-laws, nieces, nephews, extended family and friends. Preceding him in death were his son: Brett Collins; parents: Walter Lee Collins-Garcia and Barbara Collins; brother: Walter “Tiny” Collins; sister: Cynthia Collins; nieces: Christina Collins and Catrina Collins; and nephew: Billy Moore. John was a man of few but kind words who was always willing to lend a helping hand. He will be remembered as a dedicated and loving husband, father, grandfather, brother, and friend. His kindness will never be forgotten. Memorial Services for John Christian Collins were held Saturday, February 1, 2020 in the Wilson Mortuary Salem Chapel with Pastor Everett Enloe officiating. The obituary was shared by Pastor Linda Skaggs and Eulogy by Mike Thompson. Special music was provided by Michael Connors and Angie Harrison along with song selections "Dancing in the Sky" and "When I'm Gone". Honorary Pallbearers were James Collins, Robert Young, Jordan Humble, John Young, Joseph Wilson, Jimmy Gorman, and Earnest Marchbanks. Arrangement were under the direction of Wilson Mortaury of Salem, Missouri.

John Christian Collins was born on November 9, 1972 in Springfield, Illinois to Walter Lee Collins-Garcia and Barbara Ann (Payton) Collins, he was later raised by his foster father, Mike Thompson, and passed away on January 28, 2020 at Phelps... View Obituary & Service Information

The family of John Christian Collins created this Life Tributes page to make it easy to share your memories.

John Christian Collins was born on November 9, 1972 in Springfield,...

Send flowers to the Collins family.