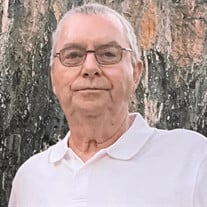 John Truman Hobson was born on June 13, 1945 to Edward and Edith (Fitzgerald) Hobson in Salem, Missouri and passed away on May 17, 2021 at his home in Salem at the age of seventy-five years. John grew up in the Salem and Licking area and attended Licking High School. He entered the United States Army on October 19, 1965 and served his country faithfully until his honorable discharge on September 27, 1967. John was united in marriage to his sweetheart, Linda Sue Stroburg on May 6, 1972 and together shared forty-nine years of memories. John and Linda were blessed with one daughter, Cindy. John was a truck driver and worked in transportation for forty-six years. After many years of trucking, he started his own business, Hobson Trucking. John was a hard worker and took pride in providing for his family. John enjoyed woodworking and creating beautiful pieces. He valued spending time outdoors, and always looked forward to camping trips. John also loved grocery shopping and cooking different foods for his family to try. He loved his family dearly and treasured many wonderful memories of their time spent together. John attended Walking Faith Ministries. John is survived by his loving wife Linda Hobson of the home; one daughter: Cindy Jones and husband Brian of Derby, KS; two brothers: Wilmer Hobson and wife Linda of Salem, MO, Winifred Hobson and wife Carolyn of House Springs, MO; sister in law: Janet Hobson of St. Louis, MO; three grandchildren: Kaylea Brokering, Lauryn Jones, and Nathan Jones; as well as many nieces, nephews, other relatives, and friends. He is preceded in death by his parents: Edward and Edith Hobson; brothers: Roy Hobson and Troy Hobson. John will be fondly remembered and deeply missed by all who knew and loved him. Funeral Services for John Truman Hobson were held Friday, May 21, 2021 in the Wilson Mortuary Salem Chapel with Pastor Lyndell Decker officiating. Song selections played were “Wings of a Dove”, “If I Didn’t Have You”, and “Amazing Grace”. Serving as Pallbearers were Gary Larson, Benny Maxwell, LeRoy Dixon, Mo Dixon, Jimmy Hobson, and Eddie Hobson. Honorary Pallbearers were Nathan Jones, Kaylea Brokering, Lauryn Jones, Clayton Dixon, Maddox Dixon, and Collin Hardy. Military Honors was provided by the United States Army and American Legion Post 99. Burial was in the Cedar Grove Cemetery. Arrangements were under the direction of Wilson Mortuary of Salem, Missouri. Memorial Contributions may be made in memory of John Hobson to the St. Jude Children's Hospital and left at Wilson Mortuary. Online condolences may be entered at wilsonmortuary.com

John Truman Hobson was born on June 13, 1945 to Edward and Edith (Fitzgerald) Hobson in Salem, Missouri and passed away on May 17, 2021 at his home in Salem at the age of seventy-five years. John grew up in the Salem and Licking area and attended... View Obituary & Service Information

The family of John Truman Hobson created this Life Tributes page to make it easy to share your memories.

Send flowers to the Hobson family.