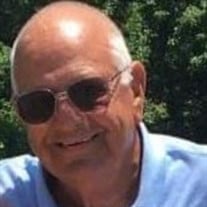 John Richard Rostron Jr. was born on October 28, 1943, in St. Louis, Missouri, to John Richard Sr. and Nancy Lee (Cash) Rostron. He grew up in Salem, Missouri, and graduated high school with the class of 1962. John enlisted into the United States Navy at the age of eighteen and served his country faithfully until his retirement in 1991 after twenty-six years of dedication. During his time in the Navy, he furthered his education and received his associate degree. John traveled around the world three times and for his honorable service, he earned many decorations, medals, badges, ribbons, and awards. John was united in marriage to his sweetheart Laura Lee Neff on September 24, 1982, in Philadelphia, Pennsylvania, and blessed with thirty-nine years of laughter and memories. John and Lee shared four children: Greg, Brandi, Lisa, and Laura. Throughout the years, they were blessed with six grandchildren and cherished the time making memories with them. John was a man of faith and enjoyed what nature provided. He loved spending time outdoors working in the yard, gardening, fishing, and tending to his bird feeders. John was passionate about helping others and serving the community. He was dedicated to helping with the food program through Salem Faith Assembly Church. John departed this life on May 19, 2022, at his home in Salem, Missouri at the age of seventy-eight years. He leaves behind his loving wife Lee Rostron of Salem, MO; children: Greg Rostron and wife Tara of Mobile, AL, Brandi Brugger and husband Gil Ortiz of Detroit, MI, Lisa Brugger of Long Beach, CA, Ali Nicholas Hawach and girlfriend Riley Majzun of Kansas City, MO, and Laura Whiting and husband Greg of Redwood City, CA; grandchildren: Jake and Kent Rostron and Zachary, Isaac, and Evan Whiting; siblings: Doris Harris of New York and Don Rostron of Arizona; special niece: Angie Blumhorst and husband John and their daughter Erica; as well as a host of nieces, nephews, other relatives, and dear friends. Preceding him in death were his parents: John Sr. and Nancy Rostron; his sister: Sandra; and his brother: Bill. John was honest, hardworking, and dependable. He leaves behind a great legacy of a life well-lived. John will be forever missed by those who loved him most. Funeral Services for John Richard Rostron Jr. were held Saturday, May 28, 2022 in the Wilson Mortuary Salem Chapel with Pastor Billy Anderson officiating. Song selection played was “Angel”. Military Honors was provided by the Missouri Honors Team. Arrangements were under the direction of Wilson Mortuary of Salem, Missouri. Online condolences may be entered at www.wilsonmortuary.com

John Richard Rostron Jr. was born on October 28, 1943, in St. Louis, Missouri, to John Richard Sr. and Nancy Lee (Cash) Rostron. He grew up in Salem, Missouri, and graduated high school with the class of 1962. John enlisted into the United... View Obituary & Service Information

The family of John Richard Rostron Jr. created this Life Tributes page to make it easy to share your memories.

Send flowers to the Rostron family.