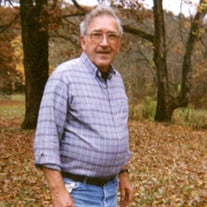 Johnnie Louis Glenn was born on March 23, 1928, in Dent County, Missouri to John and Hazel (Whitaker) Glenn and passed away on September 16, 2020, at his home in Salem at age of ninety-two years. John was the second oldest child of eleven and grew up in the New Hope area and where he also attended school. On November 6, 1954, John was united in marriage to the love of his life Betty Daly and they were blessed with six children: Johnny, Ron, Kenny, Tom, Mary, and Mark. As a young man, John went to work for Clark Elmer helping in the brick laying process and also for "Doc" Boyd doing carpentry work, then went on to work at Ely-Walker Factory. John served in the United States Army from November 7, 1950 until August 11, 1952. For his honorable service, he earned a Purple Heart, Bronze Star, Korean War Service Medal, National Defense Service Medal, and a United Nations Service Medal. After his discharge from the Army, John worked for many years at Floyd's Charcoal Plant. John loved growing beautiful gardens, and taking care of his farm and animals. He also enjoyed listening to Bluegrass music. He was a private mane who had a strong work ethic and loved his family dearly. John loved the Lord and read the Bible daily. He attended New Harmony Church. John is survived by his loving children: Ron Glenn and wife Regina of Salem, MO, Kenny Glenn and wife Tammie of Salem, MO, Tom Glenn and wife Robin of Licking, MO, Mary Vanoni and husband Mark of Salem, MO, and Mark Glenn and wife Melissa of Salem, MO; five siblings; thirteen grandchildren; ten great grandchildren; one great great grandchild; as well as many, nieces, nephews, other relatives and friends. Preceding him in death, his wife: Betty (Daly) Glenn; parents: John and Hazel (Whitaker) Glenn; son: Johnny L. Glenn; and five siblings. John was a devoted family man who will be fondly remembered but deeply missed by all who knew and loved him. Funeral Services for Johnnie Louis Glenn were held Sunday, September 20, 2020 in the Wilson Mortuary Salem Chapel with Pastor David Gidcumb officiating. Mark Vanoni read the obituary and several family members shared memories. Song selections played were "This World Is Not My Home" and "When Life Is Over". Serving as Pallbearers were Ron Glenn, Kenny Glenn, Mark Glenn, Mark Vanoni, Brian Glenn, and Josh Chartier. Military Honors was provided by the United States Army and American Legion Post #99. Burial was in the New Hope Cemetery. Arrangements were under the direction of Wilson Mortuary of Salem, Missouri. Memorial Contributions may be made in memory of John Glenn to New Hope Cemetery and may be left at Wilson Mortuary Online condolences maybe made at www.wilsonmortuary.com

Johnnie Louis Glenn was born on March 23, 1928, in Dent County, Missouri to John and Hazel (Whitaker) Glenn and passed away on September 16, 2020, at his home in Salem at age of ninety-two years. John was the second oldest child of eleven and... View Obituary & Service Information

The family of Johnnie "John" Louis Glenn created this Life Tributes page to make it easy to share your memories.

Send flowers to the Glenn family.