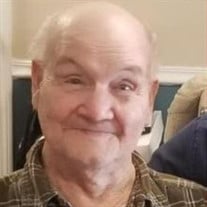 Johnnie Hillis Johnson was born June 16, 1936 in Oates, Missouri to Walter and Essie (Holmes) Johnson. He grew up in Bills Creek near Boss, Missouri and graduated with the class of 1954 from Caledonia High School. Johnnie was a hard worker and was a US Forest Service employee for many years before working with his brother-in-law in the timber industry at Mathes Sawmill. Johnnie enjoyed the outdoors, he could be found fishing at Bills Creek or in the woods hunting coons, squirrels, and rabbits. He like watching westerns, especially Gunsmoke and Texas Ranger. Johnnie never met a stranger and was always willing to lend a helping hand. He was a great man of faith and truly loved going to church. Johnnie was a longtime member of New Harmony United Baptist Church until it closed and frequently attended West Fork Church. Johnnie departed this life February 14, 2022 in Viburnum, Missouri at the age of eighty-five years. He leaves behind to cherish his memory, two sisters: Mary Alice Steelman of Houston, MO and Glenna “Marcella” Mathes and husband Bill of Boss, MO; as well as a host of nieces, nephews, cousins, other relatives, and dear friends. Preceding him in death, parents: Walter and Essie Johnson; brother: William Johnson; sister: Delores Steelman; brothers-in-law: Albert Steelman and Clyde Steelman; and nephew: Marvin Mathes. Johnnie was a gentle man whose contagious smile and kind heart was felt by all. He will be forever missed. Funeral Services for Johnnie Hillis Johnson were held Saturday, February 19, 2022 in the Wilson Mortuary Viburnum Chapel with Pastor Bill Mathes officiating. Special Music was provided by Steve and Pat Connors and Martha Mathes. Serving as Pallbearers were JR Boyle, Ethan Boyle, Bailey Reuter, Gavin Reuter, Patrick Mathes, Steve Steelman, Will Johnson and Marty Johnson. Honorary Pallbearers were John Booker, Austin Boyle, and Norman Steelman. Burial was in the Boss Cemetery, Boss, Missouri. Arrangements were under the direction of Wilson Mortuary of Viburnum, Missouri. Memorial Contributions may be made in memory of Johnnie Johnson and left at Wilson Mortuary. Online Condolences may be entered at www.wilsonmortuary.com

Johnnie Hillis Johnson was born June 16, 1936 in Oates, Missouri to Walter and Essie (Holmes) Johnson. He grew up in Bills Creek near Boss, Missouri and graduated with the class of 1954 from Caledonia High School. Johnnie was a hard worker... View Obituary & Service Information

The family of Johnnie Hillis Johnson created this Life Tributes page to make it easy to share your memories.