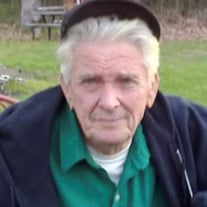 Joseph “Joe” Mader was born on October 7, 1947 in St. Louis, Missouri to Harry and Marcella (Chapman) Mader. He grew up in St. Louis and graduated from Lutheran Central High School with the Class of 1965. Joe entered the United States Army on September 2, 1966 and served his country faithfully. Joe was united in marriage to the love of his life, Sharon Kay Wright on May 19, 1970 in Illinois and together shared fifty-one years of memories. Joe and Sharon were blessed with three children: Mona, Jason, and Malinda. Joe was an all-around tinker and handyman, a jack of all trades. He was always busy whether he was working with his hands or repairing a car. Joe worked hard to provide for his family and valued his time as a Certified Nurse Assistant for many years. Joe enjoyed spending time outdoors fishing the ponds and creeks and hunting deer and squirrel. He loved a good barbecue but truly treasured the time spent with his family, especially spoiling his grandchildren and great-grandchildren. Joe passed away on June 25, 2021 in Salem, Missouri at the age of seventy-three years. He leaves behind to cherish his memories, loving wife Sharon Mader of the home; children: Mona Werdehausen of Salem, MO, Jason Mader of Festus, MO, and Malinda Mader of Salem, MO; siblings: Jim Mader of Lenox, MO, Kerry Smarko and husband Jim of Lenox, MO, Terry Salamone of Lenox, MO, Elaine Sitek of Fenton, MO, Emily Reineke of Columbia, MO, and Alice Mader of Cabool, MO; grandchildren: Naulakae Wright, Michael Polette and wife Abby, Courtney Rozgowski, Ashley Murr and husband Brandon, Brittney Griggs and husband Ben, Amber Mader, and Miranda Mader; eight great-grandchildren; as well as a host of nieces, nephews, cousins, other relatives and friends. Preceding him in death, his parents: Harry and Marcella Mader; sisters: Marcella Ketzler and Laurel Sitek; and grandson: Alonzo Charles Moore III. Joe will be remembered as a loving husband, father, brother, uncle, grandfather, and great-grandfather. He will be forever missed by all who knew and loved him. Funeral Services for Joseph “Joe” Mader were held Monday, July 05, 2021 in the Wilson Mortuary Salem Chapel with Pastor Chris Hendrix officiating. Song selections played were “Go Rest High On That Mountain” and “I’ll Fly Away”. Burial was on Tuesday, July 6, 2021 in the Jefferson Barracks National Cemetery. Arrangements were under the direction of Wilson Mortuary of Salem, Missouri. Online Condolences may be entered at www.wilsonmortuary.com

Joseph &#8220;Joe&#8221; Mader was born on October 7, 1947 in St. Louis, Missouri to Harry and Marcella (Chapman) Mader. He grew up in St. Louis and graduated from Lutheran Central High School with the Class of 1965. Joe entered the United States... View Obituary & Service Information

The family of Joseph Mader created this Life Tributes page to make it easy to share your memories.

Send flowers to the Mader family.