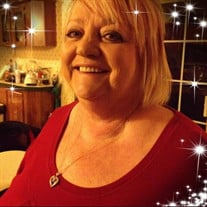 Judith “Judy” Margaretta (Hedrick) White was born on August 4, 1954, in Steelville, Missouri to James Eudell and Flora Leona (Britton) Hedrick. She grew up in Boss and attended school at Boss and Viburnum High School. Judy was united in marriage to Edward Winick on November 6, 1970 and to this union blessed with one son, James. Judy and Edward shared six years of memories before his passing on September 15, 1976. Judy later married Wayne White and together shared many wonderful years of memories until his passing. Judy took great pride in raising her son and was a dedicated homemaker. During her early working years, she was employed with the Brown Shoe Factory. Judy also spent time as a hairstylist. She was talented with her hands and had many loyal clients who she enjoyed visiting with. Judy was a woman of faith and attended Boss Assembly of God Church at a young age. She later attended Lighthouse Gospel Tabernacle when you was able. Judy enjoyed reading and studying her Bible. Most important to her were her family and friends, she valued spending time with them and adored her grandchildren and great-grandchildren. Judy went home to be with her Lord on July 19, 2021, at the age of sixty-six years. She leaves behind to cherish her memories her, loving son: James Winick and wife Heather of Galesburg, IL; mother: Leona Hedrick of Bixby, MO; siblings: Karen Knupp of Bixby, MO, Frank Hedrick and wife Michelle of Utah, Jess Hedrick and wife Sharon of Viburnum, MO, and Sis McPherson and husband Brian of Boss, MO; grandchildren: Stacha, Serenity, Brady, Haily, Jocilyn; several great-grandchildren; as well as a host of nieces, nephews, other relatives and friends. Preceding her in death, her husbands: Edward Winick and Wayne White; father: James Hedrick; and brother: Scott Hedrick. Judy was one of a kind and will be remembered for her great faith and beautiful smile. She will be forever missed by all who knew and loved her. Graveside Services for Judith “Judy” Margaretta (Hedrick) White were held Saturday, July 24, 2021 at the Boss Cemetery with Pastor Sharon Hedrick officiating. Song selection played was “Dancing In The Sky”. Arrangements were under the direction of Wilson Mortuary of Viburnum, Missouri. Online condolences may be entered at wilsonmortuary.com

Judith &#8220;Judy&#8221; Margaretta (Hedrick) White was born on August 4, 1954, in Steelville, Missouri to James Eudell and Flora Leona (Britton) Hedrick. She grew up in Boss and attended school at Boss and Viburnum High School. Judy was... View Obituary & Service Information

The family of Judith "Judy" Margaretta (Hedrick) White created this Life Tributes page to make it easy to share your memories.

Send flowers to the White family.