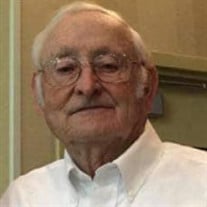 Julius Warner Swyers Jr. was born April 26, 1937 in St. Louis, Missouri to Julius and Opal (Stites) Swyers Sr and passed away August 2, 2021 in Steelville, Missouri at the age of eighty-four years. Julius grew up in Cherryville, Missouri and graduated from Cherryville High School. He joined the Army National Reserves and served his country faithfully until his honorable discharge. Julius was united in marriage to his sweetheart, Carol Ann Gregory on November 28, 1960 and together shared fifty-six years of memories before her passing on January 11, 2016. Julius and Carol grew up together and were never apart. They were blessed with two sons, Greig and Mike. Julius was a dedicated husband and took great pride in raising his sons. He was employed with McDonnell Douglas as a union machinist for over forty years. In his spare time, Julius liked spending time outdoors on the farm where he ran cattle or in the wood’s deer hunting. He was an avid St. Louis Cardinals fan and enjoyed music. In his younger years, Julius played the mandolin. Julius had a deep love for his family and cherished time spent with them. He treasured the memories with his grandchildren and great-grandchildren. Julius is survived by his two sons: Greig Swyers and wife Susan of Salem, MO and Mike Swyers of Salem, MO; siblings: Mable Pyatt and husband Harry of Wentzville, MO, Jerry Swyers and wife Donna of Warrenton, MO, and Anna Jacobs and husband Bill of Arizona; as well as a host of grandchildren, great-grandchildren, nieces, nephews, other relatives, and friends. Preceding him in death, his loving wife Carol Ann Swyers and parents: Julius and Opal Swyers Sr. Julius will be deeply missed but fondly remembered by all who knew and loved him. Funeral Services for Julius Warner Swyers Jr. were held Saturday, August 7, 2021 in the Wilson Mortuary Salem Chapel with Pastor Jeanette Boyce officiating. Song selections played were “Amazing Grace”, “I Want To Stroll Over Heaven With You”, and “How Great Thou Art”. Many special memories were shared. Serving as Pallbearers were Logan Swyers, Jack Beasley, Greg LaBeau, Branden Swyers, Andrew Swyers, and Kevin Pyatt. Honorary Pallbearers were David Dillon and Jonathon Johnson. Burial was in the Sligo Cemetery. Arrangements were under the direction of Wilson Mortuary of Salem, Missouri. Memorial Contributions may be made in memory of Julius Swyers Jr. to the Sligo Cemetery or Sligo United Methodist Church and left at Wilson Mortuary. Online Condolences may be entered at www.wilsonmortuary.com

Julius Warner Swyers Jr. was born April 26, 1937 in St. Louis, Missouri to Julius and Opal (Stites) Swyers Sr and passed away August 2, 2021 in Steelville, Missouri at the age of eighty-four years. Julius grew up in Cherryville, Missouri and... View Obituary & Service Information

The family of Julius Warner Swyers Jr. created this Life Tributes page to make it easy to share your memories.

Send flowers to the Swyers family.