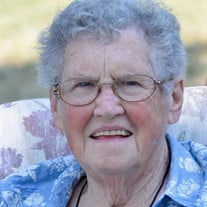 Junya Mae (Midyett) Wofford was born on January 8, 1934, in Gladden, Missouri to Floyd and Roxie (Summers) Midyett and passed away on December 29, 2020 at The Neighborhoods in Columbia, Missouri at the age of eighty-six years. Junya Mae was raised in Gladden and graduated with the Class of 1952 from Salem High School. She was united in marriage to the love of her life, Donald E. Wofford, on October 15, 1955 and together shared nearly fifty-five years of memories before his passing on June 17, 2010. Junya Mae and Donald were blessed with three children: Cindy, John, and Jimmie. Junya Mae began her long working career as a seamstress in several factories to include, International Shoe Factory, Salem Sportswear Company, Barad Lingerie, and Hagales. She was a hard worker and truly enjoyed working with her hands. Her love for the sewing/quilting machine became her true joy and passion. She loved to sew, crochet, knit, and embroider. Junya Mae could take a bag of scraps and turn them into a beautiful quilt. Junya Mae knew the value of hard work and alongside her husband raised her family on the farm. She immensely enjoyed the outdoors; working on the farm raising pigs, calves, and chickens and in the woods hunting deer and turkey. Along with yardwork and gardening, Junya Mae loved to can, make jellies, and had a green thumb for her many blooming flowers. She also liked camping at trail rides, looking for mushrooms, and making arrowheads. Junya Mae was a lady of great faith; her and Donald attended several area churches and together enjoyed church singings. Junya Mae loved her Lord, reading her Bible, and listening to the gospel on television and thru music. Junya Mae was family oriented and cherished the time spent visiting with her family and dear friends. She had great love for her children and treasured her grandchildren, great-grandchildren, nieces, and nephews. Junya Mae leaves behind to cherish her memories, loving children: Cindy Wofford of Salem, MO and John Wofford of Jadwin, MO; grandchildren: Robby Coppedge, Cody Wofford and wife Rhonda, Kyle Wofford and wife Amber, and Brianna Wofford; great-grandchildren: Jaidyn, Elexis, Brailee, Breonna, Sadie, Emma, and Bentley; brother: Carl Midyett of Salem, MO; as well as a host of nieces, nephews, cousins, other relatives, and friends. Preceding her in death, her loving husband: Donald Wofford; son: Jimmie Wofford; parents: Floyd and Roxie Midyett; and sister: Dormilee Watson and husband Calvin. Junya Mae was loved by many, will sincerely be missed, and certainly not forgotten by those who knew and loved her. Funeral Services for Junya Mae (Midyett) Wofford were held Monday, January 04, 2021 in the Wilson Mortuary Salem Chapel with Daylen Harrison officiating. Song selections played were “Angels”, “Go Rest High On That Mountain”, and “Amazing Grace”. Serving as Pallbearers were John Wofford, Robby Coppedge, Cody Wofford, Kyle Wofford, Randy Watson, and Danny Watson. Honorary Pallbearers were Brianna Wofford, Breonna Wofford, Bentley Wofford, Elexis Perkins, Sadie Folgate, Brenda Nivens, Brailee Wofford, Emma Wofford, and Dave Watson. Burial was in the Miner Cemetery. Arrangements were under the direction of Wilson Mortuary of Salem, Missouri. Memorial Contributions may be made in memory of Junya Mae Wofford to the Miner Cemetery and left at Wilson Mortuary. Online condolences may be entered at wilsonmortuary.com

Junya Mae (Midyett) Wofford was born on January 8, 1934, in Gladden, Missouri to Floyd and Roxie (Summers) Midyett and passed away on December 29, 2020 at The Neighborhoods in Columbia, Missouri at the age of eighty-six years. Junya Mae was... View Obituary & Service Information

The family of Junya Mae (Midyett) Wofford created this Life Tributes page to make it easy to share your memories.

Send flowers to the Wofford family.