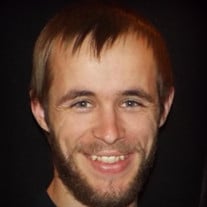 Justin Kyle Conaway was born December 16, 1990 in Rolla, Missouri to Ronald Conaway and Denise (Sieg) Karl and passed away May 4, 2019 in Springfield, Missouri at the age of twenty-eight years. Justin grew up in Salem and also attended school in Salem. On June 6, 2017, Justin was united in marriage to Searra Rae Erbschloe in Salem, Missouri and to this marriage two beautiful sons were born, Jax Henry and Jaycen Kyle. As a younger boy, Justin worked for Gary Weis as a farm hand or anything else needed. During his school years, he worked at Country Mart and was well known as a jokester. Justin started employment with Durham in 2012 and was known as "Little Bird". Everyone loved working with Justin. He recently joined 417 Subies, a Subaru Club, and was planning to attend his first meet this May. Some of Justin's hobbies were hunting, his car, joking with everyone, building things, and watching wrestling with his sons. He loved being outside and was very hardworking. Justin especially loved spending time with his boys and his family. Justin is survived by his loving wife, Searra Conaway of the home in Salem, MO; two sons, Jax and Jaycen Conaway of the home; father, Ronald Conaway of Licking, MO; mother, Denise Karl and husband, Ben of Vienna, MO; father in law, Johnny Erbschloe of Raymondville, MO; mother in law, Jennifer Erbschloe of Licking, MO; brother, Joshua Conaway of Salem, MO; sister, Shonie Conaway of Licking, MO; sister in law, Summer Erbschloe of Licking, MO; nephew, Joseph Conaway of Licking, MO; grandparents, Richard and Sheila Conaway of Salem, MO, John and Beverly Sieg of Salem, MO; and many cousins, nieces, nephews, relatives and friends. Justin will be sadly and deeply missed, but fondly remembered by all those who knew and loved him. Celebration of Life for Justin Kyle Conaway was held Friday, May 10, 2019 in the Wilson Mortuary Salem Chapel with Doyle Lakes officiating and memories shared by family and friends. Special music played was "Gone too Soon", "Two of Us", "Fred Bear" and "See You Again". All arrangements were under the direction and care of Wilson Mortuary of Salem.

Justin Kyle Conaway was born December 16, 1990 in Rolla, Missouri to Ronald Conaway and Denise (Sieg) Karl and passed away May 4, 2019 in Springfield, Missouri at the age of twenty-eight years. Justin grew up in Salem and also attended school... View Obituary & Service Information

The family of Justin Conaway created this Life Tributes page to make it easy to share your memories.

Send flowers to the Conaway family.