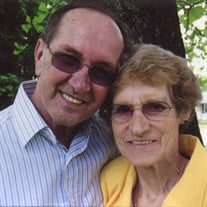 Karen Lee (Olson) Swanson was born on January 30, 1941, in DeKalb, Illinois to Ole and Dorothy (Barkley) Olson. Karen grew up in her parents loving home in Illinois and graduated from DeKalb High School. Karen was united in marriage to the love of her life, David Bert Swanson, on May 20, 1961, in DeKalb, Illinois, and together shared fifty-six years of marriage before his passing on July 24, 2017. Karen and David were blessed with two children: Sherri and Jeff. Karen and David moved to Colorado and raised their family. Karen was employed as a secretary with the Strasburg High School and also served on the Strasburg School Board. After retirement, Karen and David relocated to the Ozarks and made their home in Salem, Missouri. Karen enjoyed being active and playing on softball and bowling leagues. She loved gardening and growing beautiful flowers around her home. Karen and David liked to travel and looked forward to camping and fishing trips with their family. In her spare time, Karen could often be found bird watching and feeding the birds. Karen was a longtime member of Salem Lutheran Church. She served her church in many capacities throughout the years including the Ladies Sewing Club until her health declined. Karen was a great role model, loving wife, dedicated mother, and adoring grandmother. Her family was most important to her and she cherished the time spent with them and treasured the memories they made together. Karen departed this life on April 7, 2022, in Salem, Missouri at the age of eighty-one years. She leaves behind to cherish her memory, one daughter: Sherri Elidrissi of Los Angeles, CA; one son: Jeff Swanson of Salem, MO; one brother: Howard Olson; three grandchildren: David Swanson, Sara Swanson, and Sophia Elidrissi; one great-grandson; as well as a host of nieces, nephews, cousins, other relatives, and dear friends. Preceding her in death, husband: David Swanson; parents: Ole and Dorothy Olson; and brother: Kenneth Olson. Karen was a kind, gentle and loving person who touched the lives of many. She will be fondly remembered but deeply missed by all who knew and loved her. Memorial Services for Karen Lee (Olson) Swanson were held Wednesday, April 13, 2022, at the Salem Lutheran Church with Pastor David Kettner officiating. Arrangements were under the direction of Wilson Mortuary of Salem, Missouri. Memorial Contributions may be made in memory of Karen Swanson to the Salem Lutheran Church and be left at Wilson Mortuary. Online Condolences may be entered at www.wilsonmortuary.com

Karen Lee (Olson) Swanson was born on January 30, 1941, in DeKalb, Illinois to Ole and Dorothy (Barkley) Olson. Karen grew up in her parents loving home in Illinois and graduated from DeKalb High School. Karen was united in marriage to the... View Obituary & Service Information

The family of Karen Lee (Olson) Swanson created this Life Tributes page to make it easy to share your memories.

Send flowers to the Swanson family.