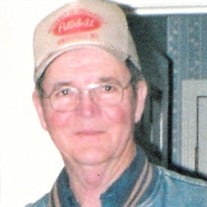 Kenny Beck was born February 22, 1943, in Adair, Missouri to Cletis Euel and Hazel Maude (Johnson) Beck and passed away April 9, 2020, at his home in Salem, Missouri at the age of seventy-seven years. Kenny was one of three children and grew up on the family farm in Sweetwater, Missouri. He was a strong man of faith and knew the value of hard work; always working hard to provide for his family. Kenny was very talented and enjoyed working with his hands. He worked in the Timber Industry as a cord woodcutter for several years and was a self-taught welder. Kenny worked most of his life as a custom welder, welding chains for eighteen-wheelers. He could fix almost anything and was proud of the work he did. Kenny was truly an avid outdoorsman, he enjoyed fishing, deer and turkey hunting, and spending time on the Meramec River. Kenny cherished time spent with his family and friends, especially at family barbecues. He loved his family deeply and treasured his grandchildren. Kenny is survived by his four children: Connie Styron of Dixon, MO, Judy Hovis of Salem, MO, Cletis Beck and wife Donna of Salem, MO, and Betty Anderson and husband Kevin of Dixon, MO; two sisters: Shirley Bratcher of Brentwood, MO and Audra Genna and husband Jack of St. Louis, MO; six grandchildren; extended family and friends. Preceding him in death were his parents: Cletis and Hazel Beck and his grandson: Robbie Chittenden. Kenny will be deeply missed but fondly remembered by all who knew and loved him. Funeral Services for Kenny Beck were held Monday, April 13, 2020 in the Wilson Mortuary Salem Chapel with Pastor Chris Hendrix officiating. Song selections played were “God Has My Fortune Laid Away”, “Falling Leaves”, “Kiss Me Mother”, and “Memories From Yesterday”. Serving as Pallbearers were Kevin Anderson, Boyd Woolf, Jack Genna, Harold Brawley, Charles Williams, and Jearl Reagan. Burial was in the Polk Memorial Cemetery. Arrangements were under the direction of Wilson Mortuary of Salem, Missouri. Memorial Contributions may be left at Wilson Mortuary. Online condolences may be entered at www.wilsonmortuary.com

Kenny Beck was born February 22, 1943, in Adair, Missouri to Cletis Euel and Hazel Maude (Johnson) Beck and passed away April 9, 2020, at his home in Salem, Missouri at the age of seventy-seven years. Kenny was one of three children and grew... View Obituary & Service Information

The family of Kenny Beck created this Life Tributes page to make it easy to share your memories.

Send flowers to the Beck family.