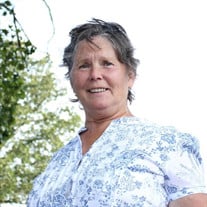 Kerry Nola (Mader) Smarko was born July 5, 1950 in St. Louis, Missouri to Harry and Marcella (Chapman) Mader. She grew up in the Baden area and graduated from Lutheran North High School with the Class of 1968. Kerry was blessed with two children, Tracy and Patrick. She took great pride in raising them and taught them lifelong values. After twelve years of dating her sweetheart, James “Jim” Smarko, they were united in marriage on February 13, 1998 in St. Charles, Missouri and to this union shared his five children, Eric, Kirk, Neil, Jill, and Deanna. In total, Jim and Kerry were together for thirty-five years. Kerry was an incredibly hard worker, she started working for Southwestern Bell, later called AT&T, and retired as a system technician after many dedicated years. She was a country girl, she truly enjoyed being outdoors and appreciating nature. She was a true animal lover, especially treasured dogs and cats. Kerry loved riding horses until her health no longer allowed. Kerry was fiercely honest and to the point. She was strong willed and took a lot of pride in being a strong, independent woman. Kerry had a great sense of humor with a contagious laugh. She was an extremely loyal person, especially to her husband, children, and sisters and brothers. Kerry believed in keeping family and friends close and loved family gatherings. She treasured her grandchildren and cherished the memories made together. Kerry departed this life on September 21, 2021 in Salem, Missouri at the age of seventy-one years. She leaves behind to cherish her memories, loving husband Jim Smarko of the home; children: Tracy Fehrenbach and partner Jason Torres of Chicago, IL, Patrick Fehrenbach and partner Jessica Morris of St. Louis, MO, Eric Smarko and wife Karen of Indianapolis, IN, Kirk Smarko of Tampa, FL, Neil Smarko and wife Brenda of St. Louis, MO, Jill Peterson and husband Mark of East Moline, IL, and Deanna Doak and husband Richard of St. Louis, MO; siblings: Jim Mader of Lenox, MO, Terry Salamone of Lenox, MO, Elaine Sitek of Fenton, MO, Emily Reineke of Columbia, MO, and Alice Mader of Cabool, MO; grandchildren: Alba, Leti, Alex, Spencer, Lauren, J.P., Evan, Kyle, Karl, Kian, Torin, and Shaelyn; as well as a host of nieces, nephews, cousins, other relatives and friends. Preceding her in death, parents: Harry and Marcella Mader; siblings: Marcella Ketzler, Joseph Mader, and Laurel Sitek. Kerry was beautiful inside and out, her fun-loving personality will be sorely missed by everyone who knew and loved her. Funeral Services for Kerry Nola (Mader) Smarko were held Saturday, September 25, 2021 in the Wilson Mortuary Salem Chapel with Pastor Chris Hendrix officiating. Song selections played were “I Am Woman Hear Me Roar”, “You’re Still The One”, and “We Are Family”. Serving as Pallbearers were her loving family and dear friends. Burial was in the Edgar Springs Cemetery. Arrangement were under the direction of Wilson Mortuary of Salem, Missouri. Memorial Contributions may be made in memory of Kerry Smarko and left at Wilson Mortuary.

Kerry Nola (Mader) Smarko was born July 5, 1950 in St. Louis, Missouri to Harry and Marcella (Chapman) Mader. She grew up in the Baden area and graduated from Lutheran North High School with the Class of 1968. Kerry was blessed with two children,... View Obituary & Service Information

The family of Kerry Nola (Mader) Smarko created this Life Tributes page to make it easy to share your memories.

Send flowers to the Smarko family.