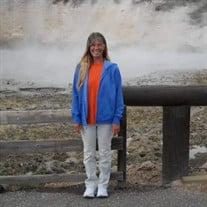 Kristina “Tina” Kay Hayes was born on January 28, 1963, in St. Louis, Missouri to David and Sharon Hagan. She was later adopted and raised by Chuck and Nancy Hurt. Tina grew up in St. Louis and attended Ritenour High School. Her family then moved to Potosi and later relocated to Salem, allowing them to be closer to family. Tina was united in marriage to the love of her life, Raymond Hayes on April 6, 1981, in St. Louis, MO, and together shared forty years of memories. Raymond and Tina were blessed with five children: Rebecca, Joe, Dan, David, and Patrick. Tina knew the importance of hard work to help provide for her family. She was a valuable employee in her jobs working at an auto parts store, driving a concrete truck, and a dump truck. She was most recently employed with Yoakum Trucking. Tina enjoyed horseback riding and barrel racing in her younger years. She immensely enjoyed the outdoors and loved to joy ride and sight-see as often as possible. Her hobbies were cooking for her family, painting, listening to music, growing beautiful flowers, and watching the birds. Tina had talented hands and was able to rebuild cars. Her favorite times were the ones spent with her family, she especially treasured time with her grandchildren. Tina departed this life on April 6, 2021, in Salem, Missouri at the age of fifty-eight years. She leaves behind to cherish her memory, loving husband Ray Hayes of Salem, MO; children: Rebecca Hayes of Salem, MO, Joe Hayes of Salem, MO, Dan Hayes of Salem, MO, David Hayes of Salem, MO and Patrick Hayes and wife Amy of Salem, MO; step-mother: Cheryl Hagan of St. Louis, MO; siblings: Dana Hagan of St. Louis, MO, David Hagan and wife Kim of Forsyth, MO, Debi Lael and husband Scott of Warrenton, MO, Doug Hagan and wife Tanya of St. Louis, MO, and Chera Baught and husband Kris of St. Louis, MO; grandchildren: Ryder, Carter, Sammy, Colton, and Anthony; as well as many nieces, nephews, cousins, other relatives, and friends. Tina is preceded in death by, parents: David and Sharon Hagan and adopted parents: Chuck and Nancy Hurt. Tina was a beautiful woman inside and out. She lit up every room she entered with her contagious smile. To know her was to love her. Tina will be forever missed. Funeral Services for Kristina “Tina” Kay Hayes were held Saturday, April 10, 2021 in the Wilson Mortuary Salem Chapel with Rev. Michael Reno officiating. Song selections played were “Amazing Grace”, “Go Rest High On That Mountain”, and “Hold On To Memories”. Serving as Pallbearers were David Hagan, Joe Hayes, Dan Hayes, David Hayes, Patrick Hayes, and Larry Breeding. Honorary Pallbearer was Kris Baught. Burial was in the Round Pond Cemetery. Arrangements were under the direction of Wilson Mortuary of Salem, Missouri. Online condolences may be entered at wilsonmortuary.com

Kristina &#8220;Tina&#8221; Kay Hayes was born on January 28, 1963, in St. Louis, Missouri to David and Sharon Hagan. She was later adopted and raised by Chuck and Nancy Hurt. Tina grew up in St. Louis and attended Ritenour High School. Her... View Obituary & Service Information

The family of Kristina "Tina" Kay Hayes created this Life Tributes page to make it easy to share your memories.

Send flowers to the Hayes family.