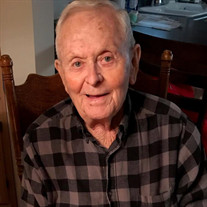 Larry Rodger Emory Sr. was born on December 6, 1940 to Thomas and Villa (Hedrick) Emory in Boss, Missouri and departed this life on December 29, 2020 surrounded by his loving family at home in Rolla, Missouri at the age of eighty years. Larry grew up in Boss, attended Acadia Valley School, and graduated from Caledonia High School. He married his sweetheart, Donna Marie Papke on July 1, 1985 and together shared thirty-five years of memories. Larry and Donna were blessed to share four children: Larry Jr., Kirk, Bobby, and Melanie. Larry was a very hard worker and valued all aspects of life. He worked in the maintenance department at the mines and several other businesses throughout the years. Larry took great pride in his welding experience and enjoyed fixing anything family, friends, and neighbors brought to him. Larry strived to make metal stronger and truly believed he could. Larry valued spending time outdoors with his family. He loved everything nature and enjoyed hunting and fishing. Larry loved taking his wife, children, and grandchildren on hunts and spending time with family and friends at Deer Camp. He was known as a teacher, teaching his children and grandchildren how to shoot and do it safely. Larry truly cherished the time spent with his family, especially making memories with his grandchildren. Larry was a great man of faith and attended Calvary and Boss Assembly of God. His faith was extremely important to him and he handed down that legacy to make sure it was important to his family. Larry always demonstrated unconditional love, loyalty, kindness, and honesty to others all his life. Larry leaves behind to cherish his memory his loving wife Donna Emory of the home; children: Larry Emory Jr. and wife Sheri Lynn of Steelville, MO, Kirk Emory of Rolla, MO, Bobby Emory of Salem, MO, and Melanie Tucker and husband Dale of Bunker, MO; brother: Kenneth Emory of Boss, MO; nephews and nieces: Debra, Cathy, Randy, and Jeff; grandchildren: Heather Wright, Nick Emory and Kristen, Tiffany, Thomas, Trinity and Megan Emory, Kaylie Helms, Shyann Emory, Shea Emory and Serina, Jake Swain and Alex, Garett Bowen and Taylor, and Regan Bowen; great-grandchildren: Hunter, Hayden, Eli, Miley, Brantley, Mary, Izabella, Emmalyn, Wilder, and Charli Ray; as well as a host of nieces, nephews, other relatives, friends, and special friends in Arizona, Wisconsin, North Carolina, Illinois, and Missouri. Preceding him in death, parents: Thomas and Villa Emory Larry was one of a kind and fun to be around, his great sense of humor will never be forgotten. Larry will be forever missed. Funeral Services for Larry Rodger Emory Sr. were held Saturday, January 2, 2021 at the Boss Assembly of God Church with Pastor Paul Davis and Pastor Danny Kemp officiating. Special music was provided by Pam Davis, Thomas Emory, Melanie Tucker, Kyle Major, and David Major. Serving as Pallbearers were Nick Emory, Shae Emory, Thomas Emory, Hayden Emory, Hunter Reed, and Garett Bowen. Honorary Pallbearers were Jake Swain, Eli Emory, Brantlee Wright, Wilder Emory, Gene Anthony, Roger Burton, Keith Montgomery, Kevin Montgomery, Sam Wilcockson, and Bruce Wilcockson. Burial was in the Boss Cemetery. Arrangements were under the direction of Wilson Mortuary of Salem, Missouri. Memorial Contributions may be made in memory of Larry Rodger Emory Sr. to the Calvary Assembly of God and mailed to PO Box 851 Rolla, MO 65402 or Boss Assembly of God and mailed to PO 332 Boss, MO 65440 or online at https://bossassembly.generush.org/ or both may be left at Wilson Mortuary. Online condolences may be entered at wilsonmortuary.com

Larry Rodger Emory Sr. was born on December 6, 1940 to Thomas and Villa (Hedrick) Emory in Boss, Missouri and departed this life on December 29, 2020 surrounded by his loving family at home in Rolla, Missouri at the age of eighty years. Larry... View Obituary & Service Information

The family of Larry Rodger Emory created this Life Tributes page to make it easy to share your memories.

Send flowers to the Emory family.