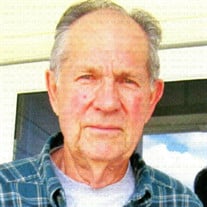 Larry Clinton Jenkins was born on February 20, 1939 in Eminence, Missouri and passed away on December 11, 2020 in State College, Pennsylvania at the age of eighty-one years. Larry was the seventh of nine children. His parents were Clarence and Mattie Williams Jenkins. He grew up on the family farm just outside Eminence, Missouri. He attended Story’s Creek School and graduated from Eminence High School in 1957. Larry received a bachelor’s degree in 1961 and a master’s degree in 1965 from the University of Missouri. He began his career in University of MO Extension as 4-H Agent in Dent County. He received a PhD from University of Kentucky in 1970. He retired from Extension in 1999 at Penn State University. He was a Farm Management Specialist, teaching farmers to use their computers for Farm Record Keeping and Farm Income Tax Preparation. May 13, 1961, he married Glenda Cook. Their children are Brent Jenkins (wife Carol), Lawrenceville, GA, Tim Jenkins (wife Sandra), Burns, KS, and Cheryl Barker (husband Darin), State College, PA. Grandchildren are Stephen and Amy Jenkins, Bethany, Zachary, and Hannah Jenkins, Rebecca and Peter Barker, and nephew Austin Jenkins, son of his brother, Lynn. His surviving sisters are Mary Weber, Stevensville, MT and Margaret Esposito, Tampa, FL. In Christian obedience, he was baptized by Bro. Bill Wynn in 1962. Preceding him in death were his parents, Clarence and Mattie Jenkins, his brothers, Lee Powell, C.P. Jenkins and Lynn Jenkins, his sisters, Kathleen Powell, Alta Cook, and Ernestine Lee. Private Graveside Services were held Tuesday, December 22, 2020 at the Green Forest Cemetery with Pastor Chris Hendrix officiating. Song selection played was “Leave Me A Message”. Arrangements were under the direction of Wilson Mortuary of Salem, Missouri.

Larry Clinton Jenkins was born on February 20, 1939 in Eminence, Missouri and passed away on December 11, 2020 in State College, Pennsylvania at the age of eighty-one years. Larry was the seventh of nine children. His parents were Clarence... View Obituary & Service Information

The family of Larry Clinton Jenkins created this Life Tributes page to make it easy to share your memories.

Send flowers to the Jenkins family.