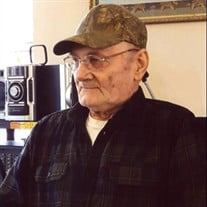 Larry Duane Schrader was born on June 30, 1945, in Granite City, Illinois to William and Georgia (Pace) Schrader and passed away March 19, 2020, in the Salem Care Center of Salem, Missouri at the age of seventy-four years. Larry has always been a hardworking man and began his working career at a young age in auto body with his Uncle Lloyd Welch. With hard-working hands, Larry took a lot of pride in his work and helping others. Larry could be found watching westerns on television, some of his favorites were Gunsmoke and Bonanza. He enjoyed spending time with his family, talking with friends and neighbors, and spending time outdoors "watching the grass grow." Larry treasured the time spent with his nieces and nephews and was a father figure to them. Larry is survived by his two brothers: Dwight Schrader of Salem, MO and Jimmy Conduitt of Salem, MO; four sisters: Darlene Wethy and husband Gerald of Salem, MO, Pat Dockery and husband Vernon of Scottsville, KY, Carmeletta Mendez and husband Rafael of Salem, MO, and Ellen Hedgcothe and husband Michael; special niece: Keona Cann of Greenville, IL; as well as numerous nieces, nephews, extended family and friends. Preceding him in death were, his parents: William Schrader and Georgia (Pace) Conduitt; three brothers: Donald Schrader, Arthur Schrader, and Gary Conduitt. Larry will be remembered for his sense of humor, gentle spirit, and willingness to help others. He will be missed by all who knew and loved him. Memorial Services for Larry Duane Schrader were held Tuesday, March 24, 2020 in the Wilson Mortuary Salem Chapel with Pastor Charlie Younger officiating. Song selections played were “In the Garden” and “Go Rest High on that Mountain”. Arrangements were under the direction of Wilson Mortuary of Salem, Missouri.

Larry Duane Schrader was born on June 30, 1945, in Granite City, Illinois to William and Georgia (Pace) Schrader and passed away March 19, 2020, in the Salem Care Center of Salem, Missouri at the age of seventy-four years. Larry has always... View Obituary & Service Information

The family of Larry Duane Schrader created this Life Tributes page to make it easy to share your memories.

Send flowers to the Schrader family.