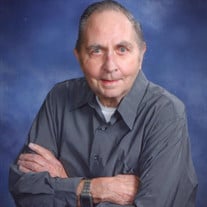 Larry George Shadle was born August 5, 1934, in Oelwein, Iowa, to George and Ruth (Odell) Shadle. He was raised in Maynard, Iowa, and graduated with the class of 1952 from Maynard Consolidated School. He furthered his education at Upper Iowa University before he enlisted into the United States Air Force in 1954. He was stationed in Japan for two years; he later returned to college and received his BSEE from University of MO-Rolla in 1966. Larry was united in marriage to Carolyn Ann Hoeft on June 11, 1961, in Garner, Iowa, and shared together sixty years of laughter and memories. Larry and Carolyn were blessed with two daughters, Ann and Laura, and further blessed with four granddaughters. Larry loved his family and treasured the time spent with his granddaughters. Larry was a dedicated worker and skilled electrical and industrial engineer. His working years include time spent at the Missouri Public Service Company, Kornfeld-Thorp Electric Company, and the Cyclo-Index Division of Leggett & Platt. Larry had an active mind and liked working with his hands. He loved to challenge himself and kept himself busy, especially with carpentry and electrical projects. Larry also enjoyed flying radio-controlled airplanes. Larry was a frequent and proud blood donor, having donated numerous gallons in his lifetime. He was a man of faith, baptized March 28, 1948, and was later confirmed. He served in many leadership positions in the churches he attended. He was a longtime member of the Salem Lutheran Church. Larry departed this life March 21, 2022, in Licking, Missouri, at the age of eighty-seven years. Those left behind to cherish his memory include his loving wife Carolyn Shadle of Salem, MO; daughters: Ann Hossler and husband Tim of Lawrence, KS and Laura Shadle of Salem, MO; sister: Pat Birchard and husband Jerry of Texas; granddaughters: Liz Beaman and husband Ben, Naomi Niemann and fiancé Peter Berwyn, Abbey Hossler, and Elise Hossler; as well as a host of nephews, cousins, other relatives and dear friends. Preceding him in death were parents: George and Ruth Shadle; and brothers: Keith and Jim. Larry will be remembered for his quick mind, his strong engineering skills, his dry sense of humor, and his ability to find pleasure in the simple things in life. Larry will be forever missed by those who loved him most. Funeral Services for Larry George Shadle were held Friday, April 1, 2022 at the Salem Lutheran Church with Pastor David Kettner officiating. Congregational Hymns were sung. Serving as Pallbearers were Tim Hossler, Ben Beaman, Craig Hall, Terry Phelps, Shannon Wright, and Armin Scheller. Burial with Military Honors was held at the Missouri Veterans Cemetery in Waynesville, Missouri. Arrangements were under the direction of Wilson Mortuary of Salem, Missouri. Memorial Contributions may be made in memory of Larry Shadle to Lutheran World Relief or Parkinson’s Foundation and left at Wilson Mortuary. Online Condolences may be entered at www.wilsonmortuary.com

Larry George Shadle was born August 5, 1934, in Oelwein, Iowa, to George and Ruth (Odell) Shadle. He was raised in Maynard, Iowa, and graduated with the class of 1952 from Maynard Consolidated School. He furthered his education at Upper Iowa... View Obituary & Service Information

The family of Larry George Shadle created this Life Tributes page to make it easy to share your memories.

Send flowers to the Shadle family.