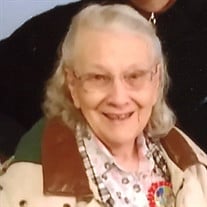 Laura Ellen (Alderson) Gibbs was born on March 18, 1928, in Butler, Oklahoma, was raised in Baker, Oregon, and passed away on September 17, 2020, in Salem, Missouri at the age of ninety-two years. Laura was united in marriage to the love of her life, Elmer V. Whitlock and together were blessed with four children: Michael, Carolyn, Randolph, and Ruby. They shared many wonderful memories together until his passing. Laura became an independent woman who took great pride in raising her children. She was employed for many years as a housekeeper for several families and was proud of her work. On May 5, 1979, Laura married Herman Woodson Gibbs and together they shared thirty years of marriage before his passing on March 23, 2009. Laura loved working with her hands and was a gifted seamstress and tailor. She was a talented cook and enjoyed spending time in her flower gardens. Laura was a woman of faith and longtime member of Salem Full Gospel. Most important to Laura was her family and she deeply cherished the time spent with them; especially the memories made with her grandchildren, great-grandchildren, and great-great-grandchildren. Laura is survived by her loving children: Michael D. Whitlock and wife Rosita of Arizona; Carolyn Bergeron of Nebraska, Randolph Whitlock and wife Linda of Illinois, and Ruby McDonald and husband Mark of Joplin, MO; step-children: Rick Gibbs of Belgrade, MO, Shirley Pettus of Salem, MO, and Lewis Gibbs of Salem, MO; brother: Jim Alderson and wife Louise of Oregon; as well as many grandchildren, great-grandchildren, great-great-grandchildren, nieces, nephews, other relatives and friends. Preceding her in death were, her husbands: Elmer V. Whitlock and Herman Woodson Gibbs; parents: Mr. and Mrs. Alderson; brother: Buck Alderson; grandson: Joshua; and son-in-law: Maurice A. Bergeron. Although no longer here in our presence, remember the impact Laura has made on your life and the lives of others. Your memories will live on forever. Funeral Services for Laura Ellen (Alderson) Gibbs were held Tuesday, September 22, 2020 in the Wilson Mortuary Salem Chapel with Pastor Bill Stack officiating. Song selections played were “Old Rugged Cross”, “Amazing Grace”, and “In The Garden”. Serving as Pallbearers were Buddy Ferguson, Michael Whitlock, Mark McDonald II, Jesse Chounard, Matthew Whitlock, and Lewis Gibbs. Burial was in the North Lawn Cemetery. Arrangements were under the direction of Wilson Mortuary of Salem, Missouri. Memorial Contributions may be made in memory of Laura Gibbs to the Lifeway Center Food Pantry and left at Wilson Mortuary Online condolences may be made at www.wilsonmortuary.com

Laura Ellen (Alderson) Gibbs was born on March 18, 1928, in Butler, Oklahoma, was raised in Baker, Oregon, and passed away on September 17, 2020, in Salem, Missouri at the age of ninety-two years. Laura was united in marriage to the love of... View Obituary & Service Information

The family of Laura Ellen (Alderson) Gibbs created this Life Tributes page to make it easy to share your memories.