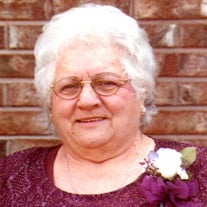 Laura Jane (White) LaRue was born on August 31, 1933 in Oates, Missouri to Edgar Marion and Velma (Mathes) White and passed away on April 11, 2019 in the Missouri Baptist Medical Center of St. Louis, Missouri at the age of eighty-five years. Jane grew up and attended school in Oates, Missouri. On April 5, 1951, Jane was united in marriage to Oren LaRue in Oates and to this union six children were born, Sue, Terry, Gary, Philip, Scott, and Shane. Jane loved being a mother and homemaker. She kept her family fed with her talent in the kitchen making her wonderful pies, desserts, and her famous potato salad. She kept her family clothed with her sewing skills and the countless loads of laundry over the years. Jane was involved with her kids through their school years and all their sports and activities. Jane worked in the West End and Viburnum Schools as a cafeteria cook for many years. She also worked in the Iron County Elections. Her hobbies were playing games, cooking, Cardinal Baseball, camping and spending time with her family and friends. Jane enjoyed going to church, and she loved serving God at Locust Grove United Baptist Church where she was also a member. Mexican Train Dominoes was her favorite game and she would let you know she was going to win the game. When playing croquet she liked to scoon others but did not like to be scooned herself. Playing the game of Aggravation, sometimes the marbles would stay on the board and sometimes not! While watching Wheel of Fortune on TV, Jane liked to outwit her children. She and her family spent time camping from the days of Cook Springs to the recent years in state campgrounds. Jane and Oren had many friends that enjoyed the camping experience with them. A funny story about Jane was during the 4th of July, she enjoyed setting off Roman Candles and one year she had one lit and twirled in the air towards the sky. She then realized it was what she thought was a dud, so she then turned toward family that was gathered on the front porch, still twirling the firework, only now aimed at individuals. As the colorful balls of fire shot through the gathered family, they ducked and scurried off the porch for safety. She laughed until she was out of ammo. Jane had an ornery side to her. She once put one of her younger boy's up to hiding in the little compartment behind the rear seat of a Volkswagen, this was because they would not take him to town to see his friends. Preceding her in death were her parents, Edgar and Velma White; brothers and sisters, Carl White, Aaron White, Forcine Dunn, Jerline White, Geneva Barton, Alma White, and Earl White; and granddaughter, Tonya Harris. Survivors include her loving husband Oren LaRue of Belleview, MO; six children, Elaine Sue Harris and husband, Stephen of Belleview, MO; Terry O. LaRue and wife, Toreen of Viburnum, MO; Gary W. LaRue of Viburnum, MO; Philip G. LaRue and wife, Mary of Viburnum, MO; Scott E. LaRue and wife, Cindy of Buffalo, MO; Shane W. LaRue and wife, Stacy of Belleview, MO; grandchildren, Wes Harris and wife, Brooke of Viburnum, MO; Garrett Harris and wife, Amanda of Viburnum, MO; Lucas LaRue and wife, Tonya of Nixa, MO; Brooke Pyatt and husband, Steven of Viburnum, MO; Krystle Smith and husband, Chad of Salem, MO; Sammi Parker and husband, Greg of Salem, MO; Kirk LaRue and wife, Sarah of St. Charles, MO; Michelle LaRue of Viburnum, MO; Katie Viets and husband, Sean of Elkland, MO; Clay LaRue and wife, Patricia of Viburnum, MO; Kristie LaRue of St. Louis, MO; Rob Jacobs and wife, Diane of Buffalo, MO; Natalie Robinson and husband, Micah of Kaysville, UT; great grandchildren, Ty Harris, Wyatt Harris, Lexi Harris, Loni LaRue Harris, Cadence Harris, Gage Harris, Kathryn LaRue, Clark LaRue, Elijah Pyatt, Lanee Pyatt, Halee Pyatt, Walker Smith, Toree Smith, Owen Parker, Ali Jane Parker, Elsie LaRue, Lane LaRue, Leighton LaRue, Maddie Jacobs, Brooke Jacobs, Kyra Jacobs, Charli Robinson, and Bentley Robinson; two sisters, Rose Barton of Viburnum, MO; Shirley Dunn of Viburnum, MO; sister in law, Doris Wigger of Courtois, MO; brother in law, Jerry LaRue and wife, Evelyn of Salem, MO; and many other relatives and friends. Jane will be sadly and deeply missed, but fondly remembered by all those who knew and loved her. Funeral service for Laura "Jane" (white) LaRue was Saturday, April 13, 2019 at Locust Grove United Baptist Church with Pastor Denny Mathes and Pastor Gary Mathes officiating. Locust Grove United Baptist Church Choir song, "How Great Thou Art" and "What A Day That Would be". Other songs played were "Go Rest High", "Peace In The Valley" and "Homesick". Serving as pallbearers were Wesley Harris, Garrett Harris, Lucas LaRue, Clay LaRue, Kirk LaRue and Ty Harris. Interment was in the Sam Crocker Cemetery. All arrangements under the care and direction of Wilson Mortuary of Salem.

Laura Jane (White) LaRue was born on August 31, 1933 in Oates, Missouri to Edgar Marion and Velma (Mathes) White and passed away on April 11, 2019 in the Missouri Baptist Medical Center of St. Louis, Missouri at the age of eighty-five years. Jane... View Obituary & Service Information

The family of Laura Jane LaRue created this Life Tributes page to make it easy to share your memories.

Send flowers to the LaRue family.